When do you think the last time was that Stephen Strasburg pitched before noon in a real game? Little league, maybe? Well, Wednesday morning Strasburg took the hill for his third start with the Harrisburg Senators at the scheduled 10:30am first pitch. And by the way he performed, if I was the Washington Nationals I would contact the MLB offices to see if they can start changing their game times to morning.

Strasburg was dominant in his short five innings of work throwing 68 pitches and relinquishing only a soft line drive single to center by Keoni De Renne and a walk while striking out six. Strasburg never hit higher than 98mph on the gun, but his curveball and changeup were sharp in keeping the Reading Phillies off balance on the cool, rainy morning. Rafael Martin and Erik Arnesen threw two innings apiece to complete the Senators’ second straight shutout, 3-0, over the R-Phils.

After the hoopla and media frenzy of his professional debut on the road in Altoona and his rain-shortened introduction to Harrisburg last Friday night, it was nice to see Strasburg get his legs under him in this start. He looked relaxed, efficient, and in control the whole time. At this rate he’ll be in Syracuse in a couple of weeks and D.C. by June. 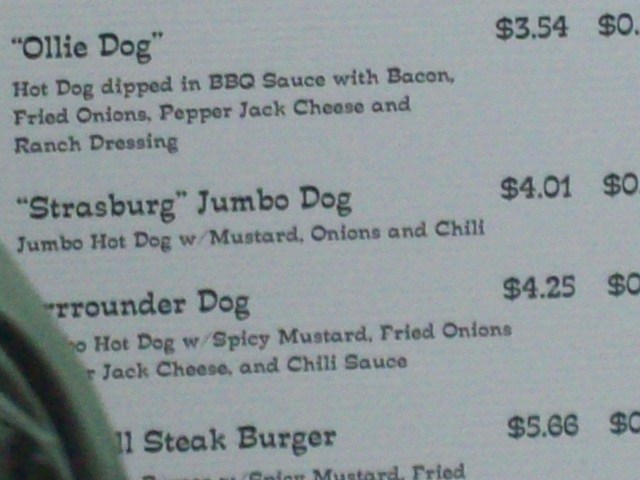 …and the menu board at The Spot

This entry was posted in Uncategorized and tagged Stephen Strasburg, The Spot. Bookmark the permalink.