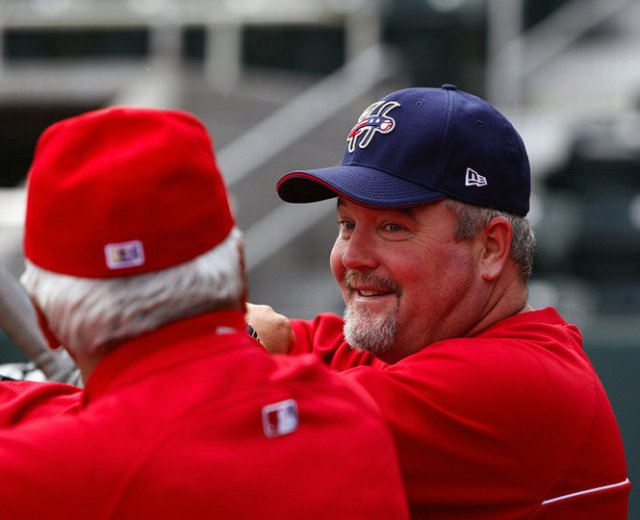 Saturday afternoon I had the opportunity to talk with Senators’ manager Matt LeCroy about the upcoming season, spring training, and the decision-making process on the players that come to Harrisburg.

The band’s getting back together again with Paulie (Menhart) and (Eric) Foxy returning to the staff. Will the second year together make your relationship even better?

ML: I think so. With Foxy it was his first year, so getting to know him a little bit more and he’ll be a lot more comfortable around everybody. I enjoyed him. I thought he worked hard. Paul does a good job. It’s good to get back because you know each other’s personalities. It just makes it a lot more comfortable. You don’t have to get to know somebody new.

For those who don’t know, what takes place in spring training on the minor league camp side?

ML: For us, we have an accelerated program which comes down about eight or nine days after big league camp starts. It’s about 40 kids and we just put them through a normal spring training. We get it going out of the gates. There’s not really much time to “get ready”, because you better be ready to work because we are going to start work the first day. There’s pitching and catching camps, throwing programs, catchers do drills, they hit, and conditioning. And then when everybody gets there, it kinda goes back to Day 1 again. We start over and do more team fundamentals. You’re more with your group where you’re going to be at. It’s a tough day for our minor league staff because guys who go to big league camp go in the morning, accelerated program after big league camp because we can’t use the fields at the beginning until they’re done, and then our other minor league camp comes in. We actually have three camps that we help run. It makes for long days but that’s spring training. But I enjoy it because I get to see kids that I didn’t see during the season that possibly could come up and be with me. Other than that it’s just long, hard days.

In that setting do you remember some of these kids or something that they did and ask Doug about them if you need a player down the line?

ML: The first couple of days in camp we go over all of the players in our camp. Then in the accelerated program we have a separate group meeting about those players. And when you see a guy as a possibiility you might watch them a little bit more. They let me rove, so I can go pretty much where I want to go out on the field to see guys and add my input on them. But that does happen.

Last year, I thought (Alex) Meyer. I looked at him as a guy that could possibly come up at the end and help. I didn’t really expect (Brian) Goodwin to make that jump. (Anthony) Rendon was a guy that I thought could come up here. But having those guys in instructional league, I had an idea that they probably wouldn’t. But the Meyer kid was on the radar as someone who could come up.

Maybe not to start the season, but Matt Skole is one of the top prospects slated for Harrisburg in 2013. What does he bring to the table?

ML: What I like about him is that he’s a left-handed hitter that can hit the ball the other way. He doesn’t really struggle much against lefthanders. The game I saw him (in Hagerstown) he faced a lefthander, and he stayed in there pretty good. I saw a lot of maturity as a hitter. Defensively, I know that was a part of his game that he really had to work on and they talked about how much he improved. Now that he’s playing first, I think he could be a great addition to our club this year. I’m sure I’ll push Doug (Harris) to let me have him from the start.

Obviously there’s a blueprint right now of where players are slotted, but how much influence can you have on that before camp breaks?

ML: I’m on him (Harris) every day. I don’t like to get fooled by spring training because it can happen. You can get fooled by a kid and then he can’t compete. I get to go in and push Doug from time to time, “I like this guy coming with me.” It is kind of selfish but if I think if a player can handle this league, I’d like to have the youngest guys I can. We get a look at the board. There’s a board in spring training. Doug, (Bob) Boonie, and all those guys mess with it every day and then you’ll go peek at it to see if he’s changed it or if you got in his head and it swayed to move a guy to your team. It’s fun…coming to this level, it’s really different. At the lower levels, you pretty much know what’s going to happen. Here it’s a big jump so they’re real hesitant at times and other times we think a player can do it. The pitching part is probably the toughest I think. In this league you have to throw strikes. You can either help a guy or hurt a guy.

I think it’s neat what happened last year with a couple of guys like Walters getting to go up (to Syracuse). Nobody was really expecting it, but he had some good games and I thought he held his own here and deserved a chance to go. Sandy and Eury also – – I thought they would be here the whole year, but they actually played their way to get to compete at Triple-A. Which is good, it’s what you want. But selfishly, you want to keep them so you have a better chance to win but that’s part of it.

Thanks again to Matt for taking the time out of his schedule to talk with us and to the Harrisburg Senators for the opportunity.