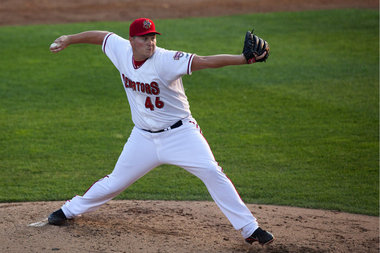 • Shawn at Thoughts of R.S. catches up with one of my favorites, Erik Arnesen (’09-’11), for a two-part interview (here and here) where he discusses last season, free agency, and his faith.

• A fascinating read on what the Nationals are doing with vision training and players like Steve Lombardozzi (’10-’11) and Bryce Harper (’11) swearing by it. Expect to find similar programs trickle down to the minors including here in Harrisburg. (WaPo [Wagner])

• Christian Garcia (’12) was shelved for at least another week with a partial tendon tear in his forearm and the injury puts his status for opening day in question.

• The Nationals made their first series of spring training cuts as Bill Bray (’05), Will Ohman, Brandon Mann, and Tanner Roark (’10-’11) were sent to minor-league camp.

• Vladimir Guerrero (’96) has expressed interest in playing this season and is willing to accept a minor league deal although the Twins and Yankees have reportedly already passed on his services.

• The Tigers plan to play Jeff Kobernus (’12) in left field more this spring training since they think that’s his best opportunity to make the team.

• A couple of former Senators, Zach Walters (’12) and Eury Perez (’12) are impressing the Nationals during their time this spring in major league camp. (Wash Times [Comak] and WaPo [Wagner])

• The 12th Annual Senators 5K is slated for May 25th with proceeds benefitting the Ronald McDonald House Charities of Central Pennsylvania.