The Odds of Making it to the Major Leagues 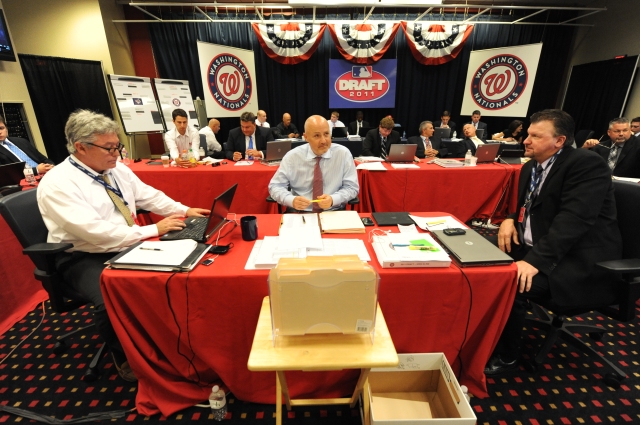 Patrick O’Kennedy of Bless You Boys, the excellent Detrot Tigers’ blog, wrote a fabulous post a couple of weeks ago on the odds of making it to the major leagues. He performed a comprehensive study of five years worth of data surrounding the players selected in each June amatuer draft.

To gauge the success (or lack of) for each draft pick, O’Kennedy examined two key factors: reaching the major leagues and the player’s impact by using WAR (wins above replacement).

O’Kennedy chose to use data for drafts between 2002 and 2006 because “more than 90 percent of players who are going to make it to the major leagues will do so within five seasons of being drafted. By that time, they will have been eligible for the Rule 5 draft, and they’ll either be on a club’s 40-man roster, or have been passed over by all other major league clubs.”

What did he find out? Among other things…

Much like O’Kennedy did with the Tigers’ drafts from that time period, I went back and looked at the Expos/Nationals drafts to see how successful (or not) they were. Considering the lack of success the organization had up until last season, I expected to find the data would reflect a high number of players reaching the major leagues but with very few from that time period making an impact.

Although close to the MLB average for all of these benchmarks, the Expos/Nationals fall short in every category. Nowhere is this more apparent than the fact that a little over half the number of players drafted in the first 20 rounds made it compared to the league average. So, not only was the product on the field at Olympic and RFK Stadium not great but throughout the farm system as well. That piece of information isn’t a surprise to those of us in Savannah, Hagerstown, Brevard County, Potomac, Harrisburg, Columbus, and Syracuse as we are quite familiar with suffering through the lean years.

How the Expos/Nationals have drafted, year by year (round listed before player):

The only draftee to have a positive (barely) WAR from this group is Rasner who will be starting his fifth season pitching for the Rakuten Golden Eagles of the Japan Pacific League. The major disappointment has to be first-round selection Clint Everts who was drafted 5th overall and has yet to log one inning in the major leagues. What makes his selection look even worse in hindsight is the pitchers who were drafted after Everts in that year’s first round: Zack Greinke, Cole Hamels, and Matt Cain.

2003 produced the biggest crop of players from a single draft in this time period to reach the majors (seven), but “The Chief” was the only one to produce to the level of his draft status.

2012 was a breakout season for Ian Desmond and if he continues on that arc, his WAR will keep rising into the double-digits and improve how the Expos/Nationals’ drafts looked many years later.

2005 had an unbelievable class that included Justin Upton, Ryan Braun, Troy Tulowitzki, and Andrew McCutchen among others, but the organization picked the face of the franchise, Zimmerman, with their first ever selection as the Nationals. Besides Zimmerman’s obvious high ceiling, the selections of Lannan and Stammen outside the top ten made this draft their biggest success during the five-year period looked at.

The last draft of the Rizzo-less Nats (he was appointed Assistant GM/VP of Baseball Operations on July 24, 2006) was one of their weakest ever and set the club up for their high draft position for the next several years. 2006 also featured the disasterous compensation pick of Colton Willems with the 22nd overall selection for losing Esteban Loaiza in free agency. Willems struggled in his minor league career and the highest he ever climbed was Single-A Potomac for six starts in 2009.

So far, three players (Ross Detwiler, Jordan Zimmermann, and Derek Norris) have made the major leagues and all three have tremendous upside potential for a long and prosperous career. There are five more players drafted that season who are still in the upper levels of the minors with a shot at breaking through but none look like they would post considerable WARs if they were to even make it at this point.

I’m going to include the same statements about the data that O’Kennedy did in his original piece so you can keep the analysis in perspective.

Obviously, when working with career WAR for players who are mostly still playing in the major leagues, there will be some fluctuation before they retire, but not a whole lot. There will be a few players from each draft who currently have a career WAR under 5 or under 10, who will reach those marks. But the overwhelming majority of those under 1.0 WAR aren’t going to make it. The vast majority of those with a negative WAR, and many who were barely positive, are no longer in the major leagues.

You can’t really add together all the draft selections from several years and use the same career WAR as a measure across the board to compare the draftees in one year vs another. WAR is cumulative. But this data shows what you can expect from several seasons’ drafts combined, as well as providing a look at each year. Most of the percentages are fairly consistent from one year to the next in terms of the percentages. For the most part, what you see here is what you get.