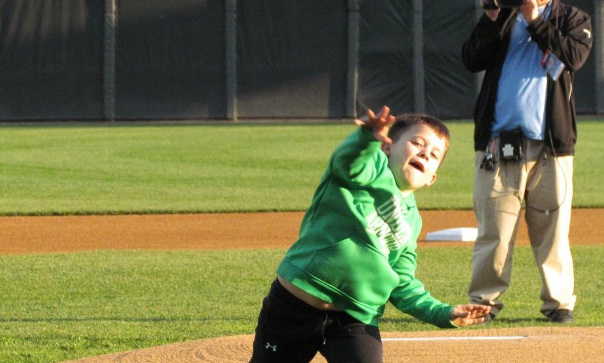 Even though the temperature on the scoreboard read 56 degrees at first pitch, the wind made it feel much colder than that…or maybe it was just the breeze from all the swings and misses as the Senators and Fightin’ Phils combined to strike out an astounding 32 batters.

Fightin’ Phils starter Jesse Biddle bewitched, bothered, and bewildered the Senators for the second time in less than a week. The Phillies top prospect threw perhaps the most dominant outing I think I’ve seen against Harrisburg in the last couple of years. He carried a perfect game into the seventh inning and finished his night allowing a lone hit while striking out 16 batters and walking two. “He didn’t change (the gameplan). We didn’t force him to change,” manager Matt LeCroy said about Biddle’s back to back starts against his club, “We didn’t hit the fastball and he kept throwing it right by us…You’ve got to tip your cap. The guy has got good stuff and he has every pitch. He was throwing everything for a strike.”

Harrisburg starter Paul Demny matched Biddle zero for zero until Troy Hanzawa singled and Zach Collier clubbed a home run to give the Fightin’ Phils a 2-0 lead in the top of the fourth. An inning later, Demny would allow another run and Reading held a commanding three-run lead as the Senators were forced to go to the bullpen. Reliever Matt Swynenberg was lights out as he held Reading to just one hit over three innings of work while striking out seven of his nine outs.

It wasn’t until Reading reliever Kyle Simon entered the game for a two-inning save did the Senators’ bats make any noise. A Brian Goodwin double and a Sean Nicol ground out plated two runs to bring Harrisburg to within a run in the eighth inning. The closest the Senators would get to tying the score was stranded 180 feet away as Josh Johnson grounded out to end the game.

Player of the Game: Matt Swynenberg

• The 16 strikeouts were a career-high for Biddle and a modern-day Reading Baseball Club record as the southpaw struck out the sides in four different innings.

• Eighteen games into the season and there are still firsts as Paul Demny was called for the team’s first balk this season.

• Last Friday’s rainout and subsequent doubleheader on Saturday put a kink into the Senators’ rotation plans for this Wednesday’s game. As it stands now, Trevor Holder will get the spot start.

• Anthony Rendon recorded his first major league hit on Monday’s 3-2 loss to the Cardinals as he drove a ball into the right-centerfield gap for an RBI double.