The Good, The Bad, and The Ugly of Brian Goodwin 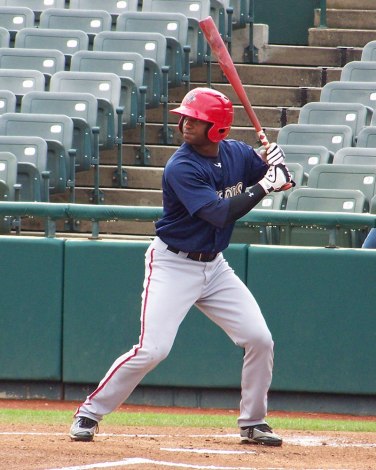 Brian Goodwin came into this season as the Nationals #3 rated prospect by Baseball America. He has a dizzying array of skills with raw power and blazing speed, yet the results haven’t come at a pace or magnitude that was expected from the Rocky Mount, NC native. I decided to delve deep into the statistics to see if I could find some rhyme or reason to his struggles. Some things matched up with what my eyes have seen, and others surprised me.

Patience is a Good Thing

Goodwin has an abundance of patience at the plate which is an especially positive trait of a speedy, leadoff hitter. So far in the 27 games this season, Goodwin has seen an average of 4.17 pitches per plate appearance. Putting that into context, if he was with the Nationals doing the same thing he would rank 7th in the entire National League. Current Nats’ centerfielder and leadoff hitter Denard Span averages 4.06 pitches per plate appearance.

Goodwin has displayed a willingness and ability to spray the ball all over the field. He doesn’t have home run power the opposite way, but as evident by his four doubles to left field he can drive the ball into the gap which is a great opportunity to take the extra base.

Patience is a Bad Thing – Part I

At times, it appears Goodwin is patient for the sake of being patient or just waiting for his perfect pitch. Which is great thing if he can gain leverage in the count against the pitcher, but if he falls behind it’s a huge uphill battle for the centerfielder.

When he is ahead or even in the count, he has a slash line (AVG/OBP/SLG) of .308/.400/.551 and an excellent average with balls put in play of .386. But if he’s at the pitcher’s mercy, Goodwin struggles to a .152 batting average and .182 slugging percentage. Again, to put his numbers in context – Denard Span is batting .308 and slugging .385 when behind so far this season. I realize Span doesn’t have the power Goodwin has, so instead let’s compare him to Jimmy Rollins’ 2012 season in the same situation where J-Roll hit .204 and slugged .286. Not great numbers at all, but considerably better than Goodwin so far in 2013.

When Goodwin is aggressive early in the count, good things happen. It stands to reason that would be the case across the board as hitters tend to sit on certain pitches early and let borderline ones go. But in Goodwin’s case, the more pitches he sees in an at-bat the progressively worse the outcome is for him.

If a Goodwin at-bat is finished in…

If one would say Goodwin has struggled overall so far, I’m not quite sure what word I would use to describe his failures against lefthanded pitchers. Suffered? Agonizing? Take your pick. I just know it hasn’t been good.

Simply put, Goodwin swings and misses way too often. The deeper into counts he goes, the greater chance that this deficiency will rear its ugly head. For a guy that has been praised as having a short stroke to the ball, it’s surprising how many times he fails to make contact on a swing.

For every four pitches Goodwin swings at, he fails to make any contact on one of them. His swing and miss rate is a high 25.5%. That’s much more in line with slugger-types like Justin Upton and Josh Hamilton than leadoff hitters. Goodwin is also pretty consistent with this rate across the board, so it’s not like he’s expanding his strike zone in pitcher counts or with two strikes (which is a good thing).

All of that leads to a very poor strikeout rate of 29.3% for Goodwin. I realize that players on a whole aren’t as concerned about strikeout numbers as they once were, but this is way, way too high. The average strikeout rate for MLB last year was 19.8%, so Goodwin averages one more strikeout per every ten at-bats than an average major leaguer.

Why would it be great if he could cut down the strikeouts? Goodwin’s batting average on balls in play this season stands at .370 which ranks him only marginally behind Josh Johnson (.385) and Jerad Head (.375) as tops on the Senators. It doesn’t take a genius (thankfully) to figure out that he has a greater chance of getting a hit if he actually puts the bat on the ball.