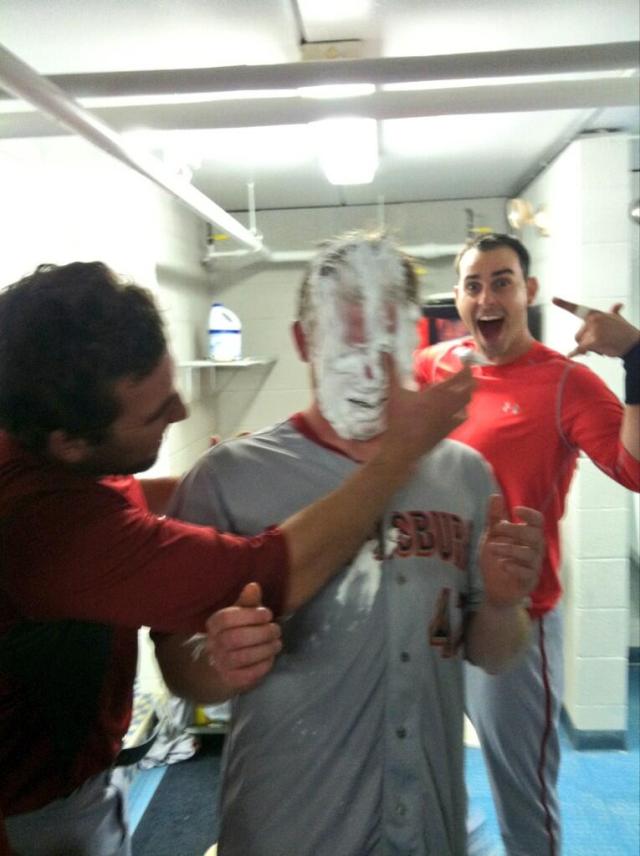 No matter how you cut it, Paul Demny has struggled in 2013. Entering Thursday’s start in Binghamton, he sported a 1-4 record with a 5.90 ERA and was set to face the same B-Mets’ squad he lasted only four innings against last Saturday night. Things have been going so poorly for the Texas righthander that PennLive beat writer Geoff Morrow characterized Thursday’s outing as “a make or break start”. To say that Demny was under some pressure would be an understatement as he perhaps was pitching for his livelihood.

But inning after inning, Demny set down B-Met batter after batter. No, he wasn’t perfect. He walked three batters, hit one, and even committed an error himself, but the zero under the Binghamton hit column never changed. The B-Mets even spoiled the shutout when they plated a run on a 3-6-1 double play in the seventh inning, but Demny never wilted.

It was only when he was 113 pitches into the game that Demny’s night was done. He turned it over to the bullpen to preserve the no-hitter and Ian Krol worked a perfect ninth inning, striking out the last two batters to write their names in the Senators’ record books.

Player of the Game: Paul Demny

All quotes from Paul Demny – –

When he realized this might be his night – “It was the seventh, I got out of that inning when Jimmy (VanOstrand) made a nice backhanded play and we got that double-play that I thought the chips were falling my way. Let’s make a push for it.”

On the trouble he ran into in the seventh inning – “I guess with any no-hitter there’s always something that could have gone wrong. After I threw it away, there were runners on first and third and we were up 6-0. Yes, I can worry about getting a strikeout and trying to keep that run from scoring just to keep the shutout, but I pitch to win. If the run scored, so be it. I wanted the double-play ball and another out so I could get back in the dugout to keep giving our team a chance to win.”

On Matt LeCroy’s visit to the mound after Demny’s error in the seventh inning put runners on the corners – “Matt actually came out and said, ‘Don’t worry, I’m not pulling you.’ He was obviously kidding around. He made a crack, ‘I can’t believe they gave that a hit.’ And I looked back and he said, ‘They didn’t put it up yet.’ I think he was just trying to add a little levity to the situation.”

On putting his struggles this season behind him – “Absolutely a different mindset. Going to the field I said, ‘I’m done trying to throw too hard or trying to make my slider break another inch. It’s not working. I’m just going to go out there and throw strikes.’ Yeah, I had three walks tonight but so be it. It was Dykstra and if you want to think about it I was just setting him up to strike out to end the game. I didn’t want to show him any strikes.”

On less talking and more focus in the dugout between innings – “In the past, I’m a talker. I come into the dugout, I talk and I do things. I’m never sitting still. But I wanted to stay in the moment and stay in the game as long as possible. I’m not going to talk. I’m not going to take my mind off anything but pitching. It’s something I haven’t done, but it’s something that needed to happen because talking in the dugout is taking my mind off the right things and putting them on the wrong things. So it was a totally different mindset to come in and be quiet and focus on the things you need to do and execute pitches…This is how people succeed. You don’t have to try and throw as hard as you can. You just try to stay smooth and deliver it and it’s going to be the same speed anyway. So I learned a lot today.”

On the support he received – “I want to give a shout out to my defense which was impeccable tonight. Rendon, JJ, all around the infield and outfield. Outstanding.”

• The no-hitter was the Senators’ fourth in modern history and second in a nine-inning game. Previous ones were: Seung Song in 2003; Chuck James, Cole Kimball, and Zech Zinicola in 2010; Shairon Martis in 2011.

• Ricky Hague (2-4, 2 RBI, 2 R) and Anthony Rendon (2-4, 1 RBI, 1 R) led the offense as the Sens raced out to an early 3-0 lead in the game’s first two innings aided by two Binghamton errors. Demny would help himself out in the sixth when he doubled off the base of the wall to drive in the inning’s third run and give the Senators some breathing room.

• The last time the Binghamton Mets were no-hit was by the Portland Sea Dogs on August 13, 2001 when Josh Beckett and two relievers completed the feat.

• Prior to tonight’s game, starting pitcher Taylor Jordan was promoted to Harrisburg from Potomac and the Senators placed Brian Broderick on the disabled list as the corresponding move. Jordan is slated to start on Saturday afternoon against the B-Mets.

• Through his Twitter account, former Senator Trevor Holder revealed he was signed by the Padres organization and was headed out west from Birmingham earlier today.