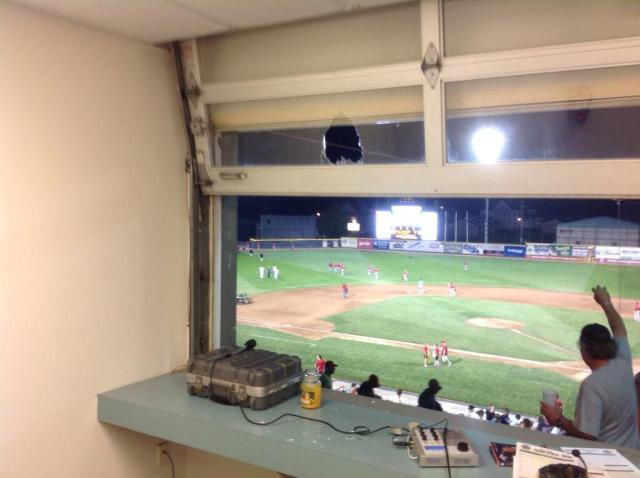 (PR) Marshall Kelner / Erie, PA – Ricky Hague and Brian Goodwin hit back-to-back home runs and the Harrisburg Senators came back from a couple early deficits to defeat the Erie SeaWolves 10-7 in the opener of a four-game series.

Down 2-0 in the third, Anthony Rendon hit a two-out RBI double to cut Erie’s lead in half. The Sens tied it in the fourth on an RBI single by Hague.

The lead didn’t last long, as James McCann hit Harrisburg starter Paul Demny’s first pitch of the bottom of the fourth over the fence for his first home run of the season. The SeaWolves took a 5-2 lead into the sixth, but with the Senators batting, the power went out.

Following a 19-minute delay, the Senators bats heated up. They scored four in the sixth inning and four more in the eighth. Destin Hood came up with an RBI single right as play resumed. Hague’s two-run blast chased Erie starter Warwick Saupold from the game. Goodwin greeted reliever Blaine Hardy with a solo shot, which ended up being the game winner.

Jimmy Van Ostrand had four hits and two runs scored. Tyler Herron picked up his first win, pitching two innings out of the Senators bullpen. Ian Krol recorded a two-inning save, his first of the season, tossing shutout ball over the final couple frames and striking out three in the process. The lefty has a 0.79 ERA in 15 relief appearances this season.

On Tuesday, the Senators continue their four-game series in Erie against the SeaWolves. Game time is 6:35 p.m. and the game can be heard on 1460am The Ticket, on the Internet through the Senators website, and it’s available through iHeart Radio beginning with the pregame show at 6:20 p.m.

• Ian Krol earned his first career professional save with two hitless and scoreless innings. Earlier this season, pitching coach Paul Menhart had told me that Krol has the stuff to be a back-end bullpen guy, “”His history dictates, with his demeanor that he has, as being a guy that enjoys that type of situation. He has that mentality and that drive. I could tell that from the day I met him.”

• The win moved the Senators back to .500 on the season for the first time since they were 14-14 on May 3rd. It also moved them into a tie with Richmond for second place in the Western Division trailing Erie by five games.

• Anthony Rendon started at second base for the fifth time this season and third since returning from his stint in the major leagues.

• Ricky Hague and Brian Goodwin hit back-to-back jacks in the sixth inning to mark the first time in almost a month the Senators have accomplished the feat.

• With two innings of relief after starter Paul Demny, Tyler Herron picked up his first win as a member of the Senators and his first in the Eastern League despite 8 appearances for Altoona in 2009.

• The sanctity of Terry Byrom’s radio booth was literally shattered when a foul ball off the bat of Jamie Johnson crashed through the window during the final frame on Monday night.