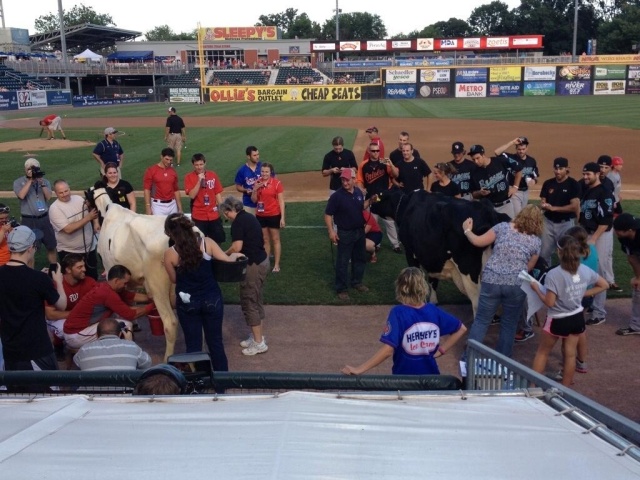 The Senators used strong starting pitching from Robbie Ray and Tyler Herron to sweep a Friday night doubleheader against the Bowie Baysox at Metro Bank Park. Although the Senators managed only five hits in both games, Jimmy VanOstrand and Jose Lozada delivered RBI singles in the first game and Jerad Head lined a three-run home run in Game Two to pace the offense.

* Ray was impressive in his Double-A debut as he tossed five innings allowing one run on seven hits and two walks while striking out eight. Ray was effective stranding runners on base as he worked around ones in each inning of work. Manager Matt LeCroy was impressed with the southpaw, “He’s got a special arm. He’s got some guts to him, he’s not afraid to throw the ball over the plate. I knew he was going to be amped up, but he showed me something.” Pitching coach Paul Menhart gave a much more detailed breakdown of Ray, “I wasn’t sure how the strikeouts were going to play with the number that he had there (in Potomac), but I think he’s got some deception because some of the elevated balls weren’t squared up and fouled back. So that’s telling me they’re not picking it up very well. I was very surprised with his change-up. He had a better change-up than I thought he had. The breaking ball is something that we are going to definitely focus on in the time he is here.”

* This was the Senators first sweep of a doubleheader since May 23th of last year against the Curve in Altoona. Since then they’ve , 2012 played eight doubleheaders between then and now. LeCroy knew the importance of the sweep as these two teams play seven games over five days, “This was a good day for us. We needed to set a tone and hopefully we can carry it over to the next couple of days.”

* Tyler Herron made a spot start in the nightcap and he exceeded any expectations the Senators’ coaching staff had going into the game. “He’s the MVP of this whole doubleheader just by going out and pitching into the sixth,” LeCroy said, “He saved the bullpen.” Menhart praised the righty, “I can’t say enough about Tyler. Since about a month ago, I really think he’s turned his whole season and maybe his career around. He’s been one of the guys that wants to pitch every day. He just wants that ball. His stuff is actually getting better.”