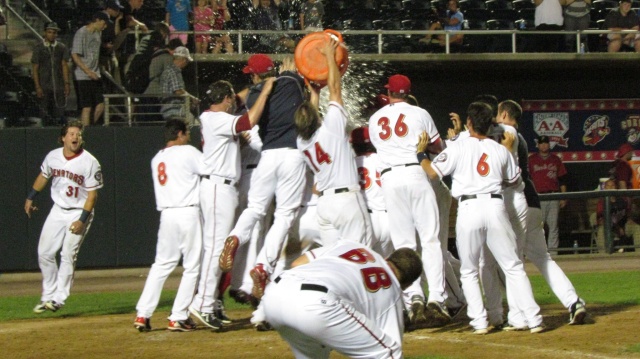 Striding to the plate as the leadoff batter in the bottom of the tenth, Jimmy VanOstrand had the scouting report for New Britain reliever Matt Hauser in the forefront of his mind. He knew Hauser liked to ride his fastball in on batters’ hands and VanOstrand was determined to hit the first pitch he saw out over the plate. Two pitches in, the slugger got one up and away and he crushed it off the concession stand in left field for a 3-2 walk-off victory for the Senators.

* Matt Swynenberg, Aaron Barrett, and Tyler Herron were electric in dominating the Rock Cats for the final five innings. New Britain only managed one hit as the trio of relievers struck out eight batters.

* Manager Matt LeCroy expects to have reliever Ryan Mattheus in Harrisburg on Tuesday night as part of his MLB rehab tour.

* VanOstrand clubbed another solo home run in the second inning and now has eight on the season.

* After Aaron Barrett struck out Jordan Parraz to end the eighth inning, words were exchanged between the pitcher and batter. That led to five or six Rock Cats to rush out of the dugout and approach the Senators’ side of the field. Order was restored, but it also appeared that some of the Rock Cats took umbrage with the celebration after VanOstrand’s home run, so expect fireworks the last two games of this series.