A Lack of Approach 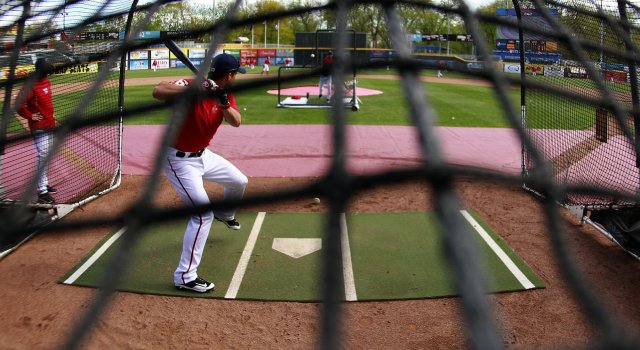 Don’t be fooled by the Nationals’ 14-run, 18-hit victory on Sunday over the Mets. One week after firing hitting coach Rick Eckstein and promoting Rick Schu to the position, it may appear that their offensive woes are in the rearview mirror. They’re not. Sure, they very well may go on to improve on their lackluster first-half numbers (it will be tough not to), but the problem at the heart of their struggles runs throughout the organization from rookie ball to the majors.

Up and down the farm system (one that Schu has overseen as the minor league hitting coordinator for the last three and a half years), hitting coaches are focused almost entirely on the mechanical aspect of hitting. Sure, they talk about being aggressive in the zone or looking for balls up, but that’s about as far as the “other” side of hitting is discussed. It’s evident in a multitude of at-bats each game that very little mentoring is done on a batter’s approach.

Year after year it’s the same, so that says to me it’s an organizational philosophy (or more appropriately a lack of one).

How many times has a right-handed batter ahead in the count (let’s say 2-0) with a man on first ground into a rally-killing 6-4-3 double play? Or a right-handed batter pull a groundball to the left side of the infield with no one out and a runner on second? Or a weak infield pop-up on a 3-1 count? I’ve seen it too many times and I’m getting sick of it. Batters need to have an approach on every pitch in every situation and by the swings a lot of guys are taking, that doesn’t seem to be the case.

Earlier this season in an interview with 106.7 the FAN in D.C., Nationals’ manager Davey Johnson described a hitting coach’s duties thusly, “He works on guys having more compact zones. You know, there’s a perfect swing, and you don’t try to change everybody’s swing, but everybody has to do certain basics to get to the ball quick. It’s the path you take to the ball. It’s how you lock and load. It’s how you release. But the main thing is, a lot of young guys are still learning who they are and they’ve been exposed to a lot of other hitting coaches that have given them erroneous information.”

There it is in black and white. No where does Johnson talk about a hitter’s approach at the plate and to me this is the problem with the Nationals hitters throughout the system. Also, is it just me or does that last statement display a lack of trust in the coaches in the minor leagues?