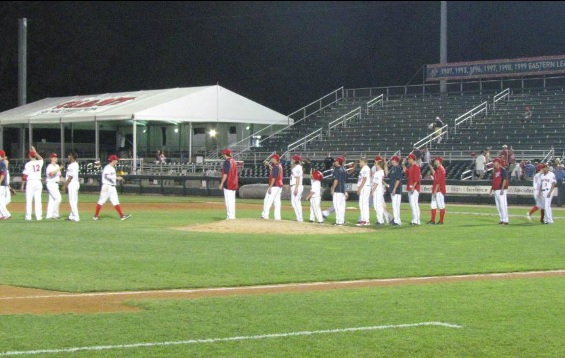 • The top of the order continued their tear as Billy Burns, Brian Goodwin, and Steven Souza went a combined 11-for-14 with five runs scored and four driven in. Manager Matt LeCroy said, “It’s fun. These guys are playing great as a group. These three guys have helped energize us here down the stretch, and hopefully we can keep it going.”

• Dampening the mood of the Senators’ fourth straight victory was an injury to Aaron Barrett after he recorded a strikeout against his lone batter. Post-game, LeCroy said Barrett had an issue with his back and was going to know more on Wednesday, “Tonight obviously something was different. I mean 87 with his fastball. Sandy went out there to talk,” the skipper said, “He’s a warrior, man. But I wouldn’t let him go.” Pitching coach Paul Menhart commented, “It’s never easy watching a guy come off the mound, and I’m not having a really good time with it.”

• Clinging to a 4-3 lead in the top of the eighth inning, reliever Richie Mirowski struck out Jarek Cunningham with the bases loaded to get out of the jam. Catcher Sandy Leon did a phenomenal job in massaging Mirowski through the inning. After the game, Menhart called Leon “magnificent behind the plate”. LeCroy had even higher praise for the backstop, “Sandy is by far one of the best catchers I’ve been around as a player and as a manager. The thing that’s unique about him is he has a knack for getting the most out of every pitcher on the staff, and that’s a bonus. I know he’s scuffling with the bat a little bit, but it doesn’t really affect him right now on his defense. He knows what his job is, and he works hard every day, and that’s why he makes some things look easy. I think the first time he went out with Mirowski he wanted him to throw that splittie and trust him that he would block it. That’s a big, big thing for a pitcher that has a nasty out pitch that’s usually in the dirt that the guy behind the plate can block it. He did a nice job that inning because I think Mirowski wanted to throw another pitch and he wouldn’t let him.”

• Earlier on Tuesday, Matt Skole, Mirowski, Goodwin, and Souza were all selected to participate in this year’s Arizona Fall League as part of the Mesa Solar Sox. “It’s an opportunity to keep playing. One of the things I preach to my guys is you got to prove to people you can play a seven-month season. What I mean by that is going to play the regular six months, and then being able to play in the playoffs,” LeCroy said, “A championship player, you’re developing him for seven months of baseball, and that’s not even including spring training. You need to show people you can play for seven months.”