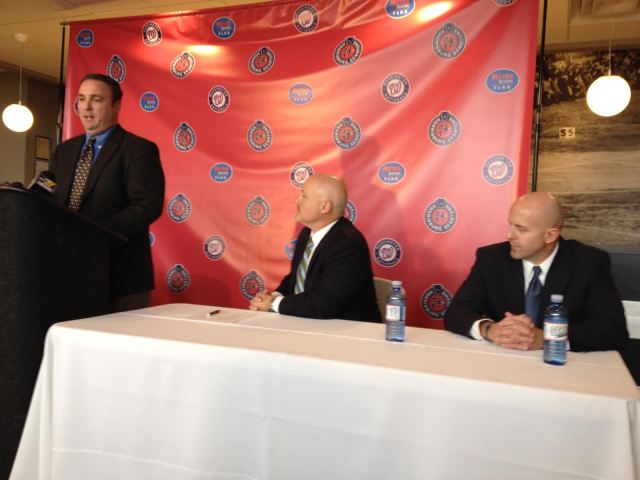 Even though it won’t be another month until pitchers and catchers report to Spring Training, a bit of baseball business was completed Wednesday afternoon on City Island as the Washington Nationals extended their Player Development Contract with the Harrisburg Senators for four more years through the 2018 season. Nationals President & General Manager Mike Rizzo, Assistant General Manager & Vice President of Player Development Doug Harris, Director of Player Development Mark Scialabba Senators President Kevin Kulp, and Mark Butler representing the Senators’ ownership group were on hand in front of media and staff at Metro Bank Park to make the joint announcement.

The deal continues the partnership between the two clubs that dates all the way back to the 1991 season when the Senators switched affiliations from the Pittsburgh Pirates to the Montreal Expos. In an official press release Rizzo commented on the long-term alliance, “It is with that history in mind that we are excited to sign on with them for another four. Harrisburg is an Eastern League gem, and we are proud to continue our association with a team, and a town, that have such rich baseball histories. From a baseball standpoint, the Senators have served as a fantastic breeding ground for some of our organization’s most talented players, and helped launch the Major League careers of many. The Senators connection in our clubhouse runs deep.”

After the press conference, the Nationals’ GM elaborated on the benefits of Harrisburg, “We’ve got a great comfort level and a great working relationship here. We love the ownership group and the front office. Not only that, but the community itself has really embraced and taken in our players. They feel comfortable here. It’s a lively, clean, safe environment to develop players. As you know the easier things are off the field, it makes it much easier to focus on the baseball development.”

The selection of a four-year contract (as opposed to a two-year) also should put to rest the annual rumors of the Nats’ interest in moving into the Richmond market especially with the likely construction of a brand new downtown ballpark there. Rizzo detailed the thinking behind the deals in both Harrisburg and Syracuse, “Continuity wise and consistency it really allows us to plan ahead. We know where we’re going to be and we know how things are going to run and we can really map out our landscape for the future. Locking in our top two affiliates for the long-term made a lot of sense to us.”