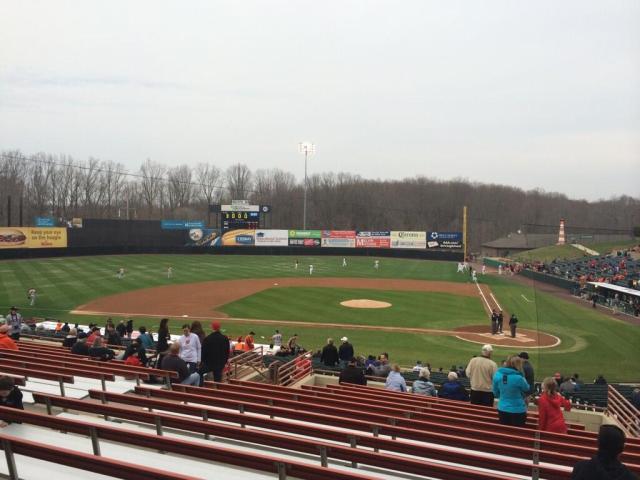 * The starting pitchers were epically bad in this opening four-game series. Blake Schwartz, Felipe Rivero, Rob Gilliam, and Matt Purke combined to throw only 10.1 innings while allowing 21 runs (18 earned) on 28 hits and 7 walks. For those mathematically deficient, that translates to an ERA of 15.68 and a 3.39 WHIP. The Baysox posted a .509 batting average, got on base at a .554 clip, and slugged .727 against the starters.

* If pitching coach Chris Michalak was on Foursquare, he might be the mayor of the grass patch between the dugout and the mound considering the number of visits he made in the four games.

* So by deduction, the bullpen was called on to eat up a lot of innings and although they weren’t spectacular, they posted halfway decent numbers as a unit. They held the Baysox to a .265 batting average while maintaining a 4.81 ERA and 1.40 WHIP. Zach Jackson deserves special mention for the effectiveness and efficiency of his two scoreless appearances.

* The Senators’ two-run first inning on Sunday was their only lead of the entire weekend and it was short-lived as Bowie responded with four runs in the bottom half of the inning.

* The last time the Senators were swept in a four-game series was July 1-4, 2010 against the Thunder in Trenton.

* The Senators’ defense didn’t help its cause much either as they committed eight errors (six fielding and two throwing).

* Harrisburg struck out a whopping 38 times in the four-game set. Every player whiffed at least once, and Michael Taylor leads the team with nine.

* I’m sure this isn’t the first impression Drew Vettleson wanted to make. The outfielder acquired from the Tampa Bay Rays this off-season, has started the season 0-for-12 with three strikeouts.

* According to the team’s Twitter account, the Baysox 4-0 start to the season is the best since the team started the 1997 season with five consecutive wins

* Former National farmhand David Freitas got an opportunity to catch up with old friends and teammates as the now Baysox backstop went 1-for-9 in two games.