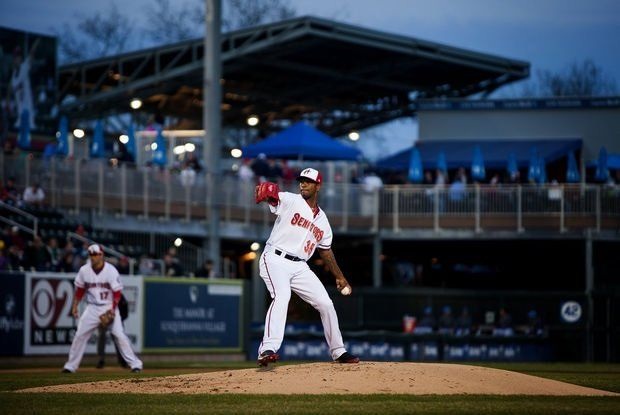 Taylor Made – Michael Taylor’s three home run performance on Sunday afternoon put him in elite company in Senators’ history as he became only the fifth player to ever achieve the feat. However, it was the way he did it that was most impressive. The first two were bombs to center and left-center respectively that would have been out in almost every park. Taylor already has so much power from his swing and seems to square up balls all the time, Sunday might just be the tip of the iceberg for him.

Jeroloman Returns – It was great to see Brian Jeroloman back on the ball field and in the clubhouse for the Senators when he was activated from extended spring training prior to Friday night’s game. The catcher’s road back had been long and frustrating after sustaining serious injuries in last year’s home plate collision during the fist game of the playoffs. Colleague (yeah, that’s weird for me too) Geoff Morrow has an excellent piece on Jeroloman coming up in the next couple of days that you need to check out.

Home Sweet Home – While Senators’ starting pitchers have struggled so far, Felipe Rivero and Blake Schwartz have actually strung some real nice outings together while pitching at home. Both hurlers seems to like the wide expanse of Metro Bank Park as evident by their splits.

Gabriel Alfaro – Alfaro is a great story. He washed out of affiliated ball in 2006 after only two seasons with the Blue Jays organization at Auburn of the New York-Penn League. Four years later, he finds himself pitching for Camden of the Atlantic League and that presumably led to catching on with Oaxaca of the Mexican League. It was there where he resurrected his career saving 51 games while compiling a 2.60 ERA in 109 appearances over two seasons. But in eight appearances with Harrisburg, Alfaro has not been exactly lighting it up. He has allowed multiple runs in half of his outings and is stuck with a double-digit ERA while opponents are hitting over .400 against him.

Relievers – It’s been a rough week for the bullpen. Even taking Sean Nicol’s mop-up job out of the equation hasn’t made their numbers much prettier. In the last week, relievers have put up an atrocious 7.24 ERA and haven’t had a game where they’ve held the opposition scoreless.

Struggling with Strikeouts – Through his entire career, A.J. Cole has struck batters out. He has never averaged less than nine strikeouts per nine innings in any professional season. Last year he fanned  151 batters between 18 starts at Potomac and seven in Harrisburg. But in 2014, Cole has had trouble putting hitters away as evident by only 11 strikeouts in 17.1 innings over four starts. In his stint with the Senators last year, 18.4% of the strikes he threw were of the swing-and-miss variety. This year, he’s down to 11.3%. Something’s amiss.