Who’s Headed to Harrisburg Next?

Friday we posted our annual “Who’s Headed to Syracuse Next?” and that got me to thinking about which players we might see make the jump from Potomac. As we are at roughly the quarter pole for the 2014 season, this is as good a time as any to let the wild-ass guessing begin on who might be headed to Harrisburg next (arbitrary odds are next to each player’s name).

Brett Mooneyham (20-1)
As excellent as Mooneyham was at Hagerstown last season (1.94 ERA, 0.978 WHIP in 17 starts), he’s been the opposite at Potomac in 2014. His last two starts have only lasted 1.1 innings and he gave up seven runs in each outing. If the Stanford product can right the ship and return to his 2013 form, I wouldn’t be surprised if the Nationals send him to Harrisburg to test their #25 prospect.

Tony Renda (16-1)
The second baseman is just coming off the disabled list, but if he can remain healthy he might be on the fast track through the Nationals’ system. Simply put, the kid can rake. He was a career .347 hitter during a standout three-year career at California and last year at Hagerstown ranked second in the minors with 43 doubles.

Stephen Perez (15-1)
Perez has been showcasing his developing offensive skill set this season in Potomac. Perez ranks in the top ten in the Carolina League for batting average and carries an impressive slash line of .325/.398/.439 through 32 games. The 23-year-old University of Miami product also leads the team with 25 runs, eight doubles, and eight stolen bases. If Jason Martinson continues to struggle, Perez may be the beneficiary.

Derek Self (10-1)
The righthanded reliever has been lights out so far this season. In ten appearances over 17.1 innings, Self has allowed only five hits and one run to carry a 0.52 ERA. If he keeps up this torrid pace, the Nationals will have no choice but to promote him to the Senators where he would join former Louisville teammate Neil Holland in the bullpen.

Oscar Tejada (8-1)
At 24 years old, Tejada is already an Eastern League veteran having played in 257 games over three seasons in Portland and Altoona. He shouldn’t be at A ball, but right now Potomac needs him in the lineup and unless he’ll have an everyday place to play in Harrisburg why promote him? Tejada leads the P-Nats in RBIs with 24 and has been a fixture at the 3-hole in their lineup.

Dakota Bacus (5-1)
The 6’2″ righthander came over to the Nationals organization late last year in the Kurt Suzuki trade and has been impressive since. Used as both a starter and reliever in his career, Bacus was recently moved to Potomac’s rotation and hasn’t skipped a beat. The former Indiana State Sycamore (like Ryan Tatusko before him) carries a 2.36 ERA and has held opponents to a .186 batting average. 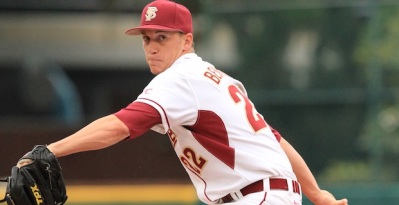 Robert Benincasa (2-1)
After a strong 2013 season spent between Hagerstown and Potomac followed by a successful turn in the Arizona Fall League, it was surprising to have Benincasa return to Northern Virginia again this year. Even though he struggled in his last outing, Benincasa has been solid as the P-Nats’ closer and it’s only a matter of time before the Florida State product finds himself in a Senators jersey.