During their 25th Anniversary Season in 2011, the Senators selected their All-Time team. If you’ve ever wondered about the pictures hanging up on the first base concourse, that would be their choices for the all-time Senators. Along with those selections, The Patriot-News also polled local baseball “experts” (I was involved hence the quotes) on which former players were the best in franchise history.

However, I’ve often wondered about the best seasons ever compiled by Harrisburg players. So, over the next couple of weeks I am going to go through position by position and select my choices for the greatest seasons as a Senator. (Note: For terms of this exercise, I only considered the position a player played most frequently) 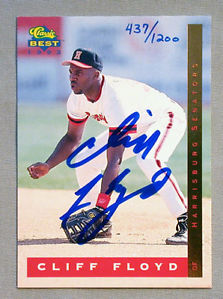 Floyd bested Manny Ramirez, Butch Husky, and teammate Rondell White for Eastern League MVP as he led the league in home runs and RBIs despite spending August at Triple-A Ottawa and September with the Expos. Floyd also finished in the top five in four other offensive categories.