Posted on September 3, 2014 by Mick Reinhard

As part of our recap of the Senators’ season, an annual tradition around these parts is to list all of the players and where they would rank as the team’s MVP for 2014 by what they contributed to the team’s successes and failures.

If you agree or disagree with any ranking feel free to leave a comment and try and sway my way of thinking.

57. Sammy Solis
After a promising spring training that had the groupthink amongst the Nationals’ beat writers penciling Solis into Washington’s bullpen as a lefty option, 2014 has to be judged as yet another disappointing, lost season for the southpaw. In one start with the Senators, Solis was hit hard by the Bowie Baysox to the tune of nine runs on nine hits over 3.1 innings.

56. Randolph Oduber
The “Groovin’ Aruban” was a necessary call-up to Harrisburg when Destin Hood’s promotion overlapped with Quincy Latimore’s phantom disabled list trip by one day. Oduber went hitless in two at-bats during his one game before being sent back to Potomac.

55. Doug Fister
The 6’8″ right-hander rehabbed with the Senators for 3.2 innings in his lone start while the team was in Reading. If you want proof of the rust he was shaking free, look no further than the three walks allowed. That’s more bases on balls than he has allowed in all 21 of his starts with the Nationals since then.

54. Wilson Ramos
Recovering from a hamstring injury, I understand how Ramos wanted to be extra cautious during his time in Harrisburg. After all, the catcher was testing the affected area pretty vigorously just by squatting pitch after pitch. But let’s just say his effort in running down the baseline during groundouts left something to be desired. 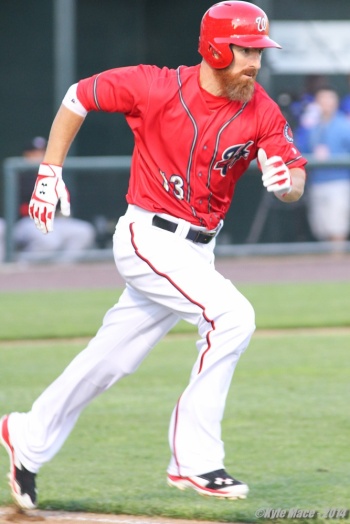 52. Brad Meyers
In six starts with the Senators, Meyers looked like the shell of his former self. The 6’6″ righty allowed 22 runs on 39 hits in only 24 innings of work. His uncharacteristic 13 walks were a sure sign that things weren’t right before the Nationals released him at the beginning of June.

51. Gabriel Alfaro
Surprised by the sight of snow when he arrived in Harrisburg in late March, Alfaro was never able to shake the deep freeze. In ten games over the first month of the season, the Venzuelan allowed multiple runs in half of his appearances. Since his release he returned to the Mexican League and has saved 15 games for the Guerreros de Oaxaca.

50. Ryan Perry
Truth be told, I was surprised that Perry was still in the organization but then again guys who can throw in the high 90s aren’t just growing on trees. Unfortunately for Perry, his chances ran out when he was never able to get back on the field throwing at full effort without pain.

49. Chris Manno
The one-time Nationals’ farmhand who was traded to the Reds with Bill Rhinehart in 2011 appeared in four games for the Senators. He didn’t throw badly. His release by the organization this time around was more a product of the numbers game concerning relievers than anything else.

47. Jeff Kobernus
Recovering from surgery on his wrist, Kobernus once again graced City Island as he rebuilt his strength and got his playing legs under him on his way to AAA Syracuse. When he was here and on base I did notice a reluctance to aggressively steal bases than what he had done in 2012. Considering he only had 18 stolen base attempts in 59 games with the Chiefs, that’s something that unfortunately carried over as well.

48. Bryce Harper
Playing in three games of a weekend series in Akron, Harper was an offensive force as he scored four runs and tallied seven RBIs. He announced to the world that he was done with his rehab assignment with a three home run game off RubberDucks pitchers Duke von Schamann and Toru Murata.

46. Blake Schwartz
I couldn’t tell you if Schwartz was overmatched at Double-A or if he never recovered after getting shelled by an older Bowie lineup on Opening Day. But in eight starts with Harrisburg, Schwartz struggled with his command as he worked from behind a lot and paid the price when he’d miss up in the zone with his finesse pitches. 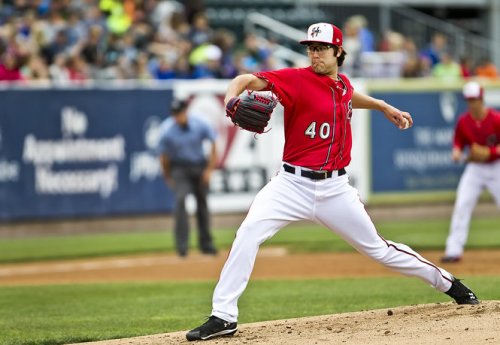 45. Matt Purke
For one game in early May, Purke looked like a guy you’d spend millions of dollars to sign as a coveted draft pick when he tossed six scoreless, two-hit innings. Unfortunately, he made seven other starts that ranged from middling at best to horrific. Purke’s season came to a screeching halt when he walked off the mound on May 18 needing Tommy John surgery.

44. Oscar Tejeda
Tejada was a stud at Potomac (as well as he should have been for a 24-year old with three seasons already logged at Double-A or higher), but injuries to Lozada, Hague, and Dykstra meant he was needed in Harrisburg. However, without consistent playing time, which he didn’t receive until the last week of the season, Tejada struggled at the plate.

43. Omar Poveda
The 6’3″ Venezuelan struggled to begin the season at Syracuse and found himself moving down the ladder to Harrisburg in mid-May. Poveda struggled through five mediocre starts before being placed on the disabled list until early August.

42. Rob Gilliam
Gilly began the year back in Harrisburg for his third stint with the Senators. But after five appearances in April, a recurring shoulder issue put him on the shelf for the remainder of the season. The Chapel Hill, NC native held opposing batters to a .231 batting average as his K9 rate sank to a career low of 6.6.

41. Brandon Bantz
Bantz was a late addition to the team in spring training when the Nationals were short a healthy catcher for the upper levels. Although the Dallas Baptist product posted the highest batting average of any Senator to don the tools of ignorance this season, the coaching staff wasn’t enamored with the way he handled the pitching staff and he was given his release when Brian Jeroloman was healthy enough to return to action.