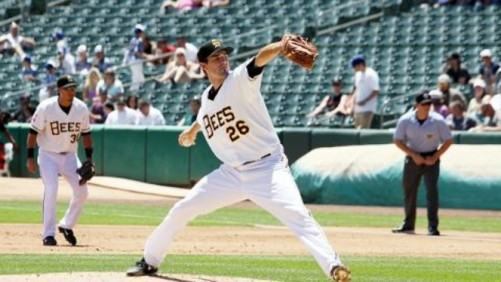 On August 9th, the Red Sox and the Angels battled for 19 frames and the Anaheim bullpen was forced to work 12.2 innings.

Needing reinforcements, the Angels called up former Harrisburg Senator Caleb Clay in time for their Sunday game against Boston. This wasn’t a “normal” transaction either as Clay had to also be added to their 40-man roster.

Been waiting on this day for the last 22 years. So thankful. Gonna soak it up! Proverbs 3:5-6

But the Angels never called Clay’s number during the game. Starting pitcher Hector Santiago tossed six shutout innings and the contest was scoreless into the eighth inning. Maybe Anaheim manager Mike Scioscia was reluctant to use Clay in such a high leverage situation. But the Red Sox plated three runs in the eighth and held a 3-1 lead over the Angels into the final frame. Instead of summoning Clay, Scioscia went to newly acquired reliever Vinnie Pestano to mop up the final three outs in the top half of the inning.

That would be the closest Clay came to making his Major League debut. The next day was an off-day for the Angels and the right-hander was ticketed back to Salt Lake City.

So thankful just to be playing baseball and healthy. Going back to Salt Lake for now! #blessed #happy — Caleb Clay (@CalebClay) August 13, 2014

Baseball is a business and the Angels didn’t owe Clay anything.

But I thought they might make things right when the rosters expanded at the beginning of September. The Angels did call up four pitchers when the Pacific Coast League ended, but none were Clay.

Admittedly, Clay’s solid season (3.78 ERA, 1.18 WHIP before the call-up) went in the crapper after the disappointing turn of events. He closed his year with four straight losses posting a 7.99 ERA and allowing six home runs. But it would have been a nice gesture by a team that is generally regarded as a first-class organization.

Look at the Red Sox and how they handled another former Senator, Carlos Rivero.

On August 25th, Boston called up Rivero after Xander Bogaerts was forced to the disabled list the day before. Just like Clay, it was the first time Rivero got the call to the majors. The third-baseman made his debut four days later when he was inserted as a pinch-hitter. Rivero didn’t see further action again until 11 days later when he subbed into the game and collected his first Major League hit. By that time Bogaerts had returned and another two position players had been promoted to the Red Sox. But yet, they still had room on the roster for Rivero.

Look at the Texas Rangers. They recently called up shortstop Guilder Rodriguez who has toiled in the minor leagues for 1,095 games and 13 seasons. But in 2014, Rodriguez played only nine games at AAA and posted a rather anemic slashline of .269/.347/.298 for Double-A Frisco. And yet, the Rangers found a place on the expanded roster for Rodriguez because he’s been a great teammate and positive influence for many of their young players.

Yes, the Red Sox and Rangers are out of the playoff race. But the Angels were clearly going to make the playoffs (since they were the first team to clinch a spot this past Monday night). It would have been nice if they could have found a spot for Clay this September.