Perhaps you’ve heard that this season’s Arizona Fall League is testing out new pace of play initiatives from Major League Baseball in an effort to speed up the game.

Among the new rules that have been implemented, ones I’d like to focus on are:

* Hitters are required to keep at least one foot in the batter’s box throughout an at-bat unless there is a foul ball, wild pitch, passed ball, if a pitch forces him out, or the umpire grants “time.”

* For games played at the Salt River Fields, a 20-second pitch clock will be posted in each dugout, behind home plate and in the outfield that will begin when the pitcher gets possession of the ball and stops when the pitcher begins his motion.

That last one has already come under fire as one-time Senator Robbie Ray and former first overall draft pick Mark Appel have already been penalized for pitch-clock violations. 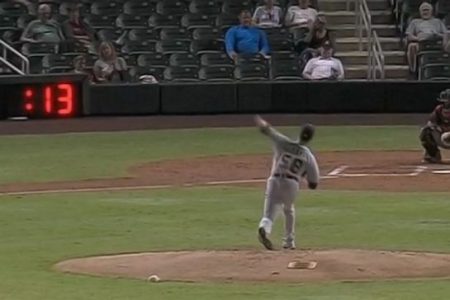 Let’s start with an question…Is there a problem with how long baseball games take? Maybe.

During the 1988 season, a nine-inning game took an average of 2 hours and 45 minutes. This past regular season the average length of a game had ballooned to 3 hours and 2 minutes (and that’s not mention that nine-inning games this postseason have averaged 3 1/2 hours).

There are many factors why there has been a 17-minute increase over the last 26 years including the innumerable commercial breaks, increased number of pitches per game (136.2 per team in 1988 vs. 144.7 in 2014), introduction of instant replay, and expanded situational specialists out of the bullpen.

Watch any old ballgames on YouTube and you’ll quickly notice the amount of time between pitches is notably shorter. Players step out of the batter’s box but they don’t adjust their batting gloves, helmet, body armor, and cup on each and every pitch. Pitchers don’t walk around the mound composing themselves, go through a series of adjustments as well, and see 40 signs before agreeing to one.

Most of the full games you can find on YouTube are playoffs and World Series contests. So, every pitch really means that much more than a random Tuesday night game in June, but pitches are still generally thrown every ten to 15 seconds.

The rule changes in the AFL are meant to fix these issues or at least contain them to something more manageable. But in watching old games there is one big issue I have seen that causes quite the time delay and I fear will not be addressed.

The frequency new baseballs get put into a game.

Now, the moment a ball hits the dirt on a ground ball, a low pitch, or a pickoff attempt the ball gets thrown out immediately. A new one is thrown in by the ump and the pitcher backs off the rubber, takes his off-hand out of his glove, and rubs the new ball up to work it in a little.

Then, baseballs rarely got replaced unless the pitcher requested a new one or the ump decided it was too marked up. If the ball hit the dirt it wasn’t automatically thrown out.

That being said, my theory is purely observational and anecdotal. I don’t know if anyone has ever done a study on the number of baseballs used today compared to years ago to prove the point. But watch the World Series the next couple of days and tell me an awful lot of time isn’t consumed by umpires throwing in new baseballs. This fairly recent trend in pristine baseballs for each and every pitch is pushing the time of game farther and farther out.