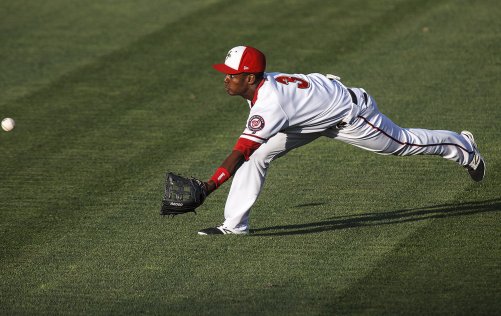 Earlier today, Baseball America released the Washington Nationals’ Top 10 Prospects along with detailed scouting reports on each player. Here is the list along with a note on each player taken from the article.

1. Lucas Giolito RHP
The Nationals rave about his maturity, humility, competitiveness and diligent work habits…With a rare combination of stuff, size, feel for pitching and makeup, Giolito has superstar potential.

2. Michael Taylor OF
Taylor can provide value even if he never hits for average, because his other tools are loud. He could become a solid everyday center fielder, and he has all-star potential if his bat takes another step forward.

3. Reynaldo Lopez RHP
He can overpower hitters with his top-of-the-scale fastball, which often sits at 96-99 mph early in games, and still sits comfortably at 93-96 later in games…Lopez has top-of-the-rotation upside if he can continue to refine his secondary stuff and stay healthy

4. Erick Fedde RHP
Fedde has advanced command of his fastball for his age, and he is a groundball machine…Fedde’s recovery from Tommy John surgery is progressing according to schedule, and he probably will make his pro debut some time in 2015.

5. Steven Souza OF **
His plus raw power plays in games because he excels at driving balls into the right-center field gap, and the Nationals would like to see him pull the ball with authority a bit more…He also has slightly above-average speed and is a smart baserunner who likes to steal bags.

6. A.J. Cole RHP
Cole’s fastball was not quite as overpowering early in 2014 as it had been in the past, but he still pitched comfortably at 91-93 mph with decent life and bumped 96…Cole figures to spend the spring in big league camp for the second straight year and open 2015 back in the rotation at Syracuse.

7. Wilmer Difo MI
He has very good first-step quickness that translates to above-average range at either shortstop or second base, and his slightly above-average arm plays at either spot…They could push him in 2015, now that he’s on the 40-man roster, with a likely assignment at high Class A Potomac and a chance to play his way to Double-A Harrisburg.

8. Drew Ward CI
Ward’s calling card is his lefthanded bat. He has good feel for his barrel and can spray hard line drives from the left-center field gap to the right-field line….Ward has a chance to hit enough to become an everyday first baseman down the road, assuming he outgrows the hot corner as most evaluators expect.

9. Brian Goodwin OF
He followed a lackluster 2013 with a horrific 2014 campaign at Triple-A Syracuse that ended on July 1 when he tore the labrum in his left shoulder sliding into second base…The Nationals have been trying for years to get him to stay in his legs and let his hands work for him, but he can’t break the habit of pulling his lead shoulder and lunging.

10. Nick Pivetta RHP
Pivetta has a physical frame and a long, loose arm action that produces easy velocity. His fastball sits at 92-94 mph and bumps 96. It is very effective when he repeats his delivery and pitches down in the zone with good angle…Pivetta’s mechanics and command remain works in progress, but he has upside as a potential mid-rotation starter if he can continue to progress.

**  After the trade that sent Souza to Tampa, BA slots the returning players Trea Turner and Joe Ross at #2 and #6 respectively. This pushes AJ Cole (and everyone after him on the list) down one spot.

The feature also disclosed their Best Tools of the organization 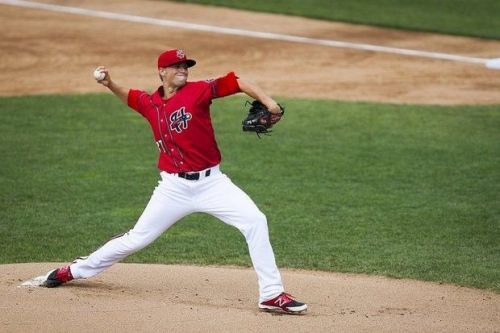 Then at 3:00 BA writer Aaron Fitt went in an online chat to discuss the list and those players that missed the cut. Here are some snippets on other noteworthy former and current Senators along with players slated for City Island in 2015.

Austin Voth
“Voth landed just outside the Top 10 for me. I don’t think there’s a ton of upside there, but I think he’s a polished three-pitch guy with a very good chance to be a back-end starter. Fairly low-risk, modest-upside prospect, but there is certainly value in that. I think he’s a starter all the way — he doesn’t have a knockout pitch to blow hitters away out of the bullpen, and he tends to get stronger as he works into the middle innings anyway. Very well suited to start.”

Drew Vettleson
“Vettleson has enough tools to make him a prospect, but he needs to improve his performance to boost his standing. I turned him in near the back of the Top 30. There are some people in the Nats organization who really think he’s got a chance to hit, and provide some power, but right now the production doesn’t match the raw ability (certainly the broken hand was a significant setback for him this year, so it’s hard to know what to make of his season). His best tool is his arm, which earns some 70 grades.”

John Simms
“Simms did make my Top 30, but closer to the back end of it. I like him, but I think he’s got a modest ceiling — he’s a little like Voth but with less stuff. It’s a fringy to average fastball around 88-92, but it plays up a bit because he commands it well (that is his best asset), and it has some sink and deception. At his best, his curveball flashes above-average, and his changeup has a chance to be fringe-average. You’re probably looking at an up-and-down No. 5 starter type or maybe a middle reliever.”

Michael Taylor
“Certainly some similarities there (between him and Astros prospect George Springer), although I see Springer as more of a power-hitting right fielder who also brings speed, whereas Taylor is a true center fielder who also brings some power, but less power than Springer. Both guys are going to strike out a lot, but both bring pretty interesting power/speed combinations. I would rather have Springer though, I think. As for when Taylor gets unblocked in D.C., your guess is as good as mine. Right now, there is no clear path to playing time. But he definitely could use another full year in the minors to refine his game anyway. Unlike Souza, I don’t think Taylor is quite big league-ready. Souza is absolutely ready now, and it would have been pointless for him to spend another year at Triple-A.”

Sammy Solis and Matt Purke
“Certainly they have been disappointments, and at this point I think Purke is a real long shot — he just is not the same guy he used to be. He’s no longer in the Top 30 for me. Solis is still in the Top 30, and I wouldn’t be surprised to see him still provide some big league value. But the guy just can’t ever stay healthy. He needs to prove it.”

Matt Skole
“Skole slipped down into the 20s for me. The problem is he’s really a first baseman only, so he’s just got to hit a lot, and his swing has so many moving parts that I think people are starting to become a little more skeptical that his bat is going to play in the big leagues. I should add that I’m also lower on Goodwin than BA in general is, but his athleticism and all-around tool package still gives him a lot more value than Skole.”

Tony Renda
“I’m a big Tony Renda fan — top-of-the-charts makeup, just a baseball rat who will always get the most out of his tools. And he can really hit. But he does not have (Giants’ infielder Joe) Panik’s raw tools or size. And he doesn’t defend as well — he has worked hard on his defense, but he’s really a bat-first player. Panik has impact ability both ways.”

Pedro Severino
“I like Severino, and consider him a borderline top 10 prospect. His defensive skills behind the plate are elite, and his arm is a rifle. He did make progress offensively in the second half, although his bat remains the real question mark with him. I’ll still be very surprised if he doesn’t at least carve out a career as a big league backup because of his defense, and if his bat comes, he has everyday starter potential.”