Richard Bleier (’15) finished his best professional season with more of the same as the southpaw went 1-1 with a 2.84 ERA over seven starts. Unlike his mastery at Metro Bank Park this season, the 6’3” lefty performed much better away from Estadio Tetelo Vargas, the home of the Estrellas de Oriente in the DWL.

Jonathan Albaladejo (‘07) teamed up with fellow alum Tyler Herron (’13-‘14) to bridge the gap in the back-end of the bullpen for the Pat Kelly-led Indios de Mayaguez on their way to the best record in Puerto Rico. Herron compiled a 5-2 record and 1.96 ERA over 18 appearances. The reliever held opponents to a .181 average and fared even better against right-handed batters. Albaladejo matched Herron with a 1.96 ERA in 20 games without yielding a single home run. 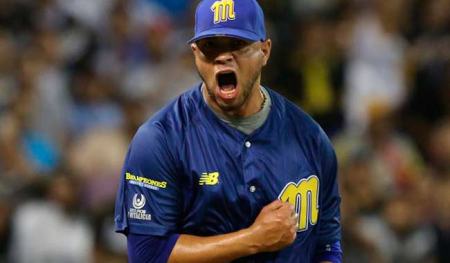 For the third straight season, Hassan Pena (’10-’11) led the Venezuelan Winter League in saves as the Cuban defector tallied 23 this season. Pena held opponents to a .176 batting average with runners in scoring position and struck out 24 batters in 29.1 innings.

John Lannan (’07, ’10) put together three excellent starts in his only appearances with Tigres de Licey in the Dominican Winter League. The southpaw allowed only one earned run in each of his starts for an impressive 1.69 ERA. However, Lannan had roughly the same groundball rate as his disappointing 2015 season in Triple-A Albuquerque and struck out only five batters over 16 innings.

After a very successful season in Japan, Victor Garate (’10) continued his positive trend with a fantastic winter ball showing for Leones del Caracas. The 31-year-old allowed one run in his first appearance and nine clean outings after that. Garate was especially tough when the situation called for it as the southpaw went the entire time without yielding a hit with runners on base.