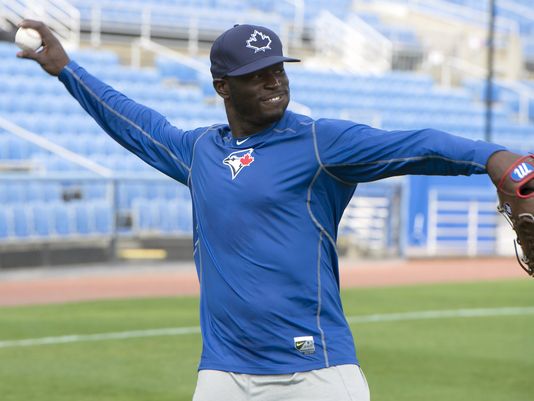 Over the next couple of weeks, I’m going to go through and preview the 12 Eastern League teams in reverse order of last season’s record. Rosters won’t be finalized until the week before Opening Day, so my Players to Watch is pure speculation at this point.

Up next, we have the New Hampshire Fisher Cats…

OF Anthony Alford – The former Southern Miss quarterback turned the corner last season as he finally focused solely on baseball. Alford still has a lot of swing and miss in his game, but his approach at the plate working counts and taking walks has impressed many. The 21-year-old has the speed, instincts, and range to be Toronto’s center fielder of the future.

RHP Brady Dragmire – The Blue Jays added Dragmire to the club’s 40-man roster this off-season despite some inflated numbers at High-A Dunedin. The reliever throws a fastball and change-up that both feature the same heavy, sinking action. It’s those pitches that have kept the ball in the ballpark at an astounding pace as he has surrendered only three home runs in 140 innings over the last two seasons.

1B Rowdy Tellez – Besides a grade 80 name on the scouting scale, Tellez brings an advanced feel for hitting to the table. The California native’s season was prematurely cut short last year with a hamate injury, but he still managed 14 home runs between two levels. The biggest issue going forward for Tellez is his weight and how that translates on the basepaths and fielding his position.

RHP Conner Greene – On the heels of a breakout 12-win campaign, Greene has shot up the prospects charts. Baseball America lists his change-up as the best in the Blue Jays’ organization and Greene has uses the fading action from his ¾ arm slot to dominate left-handed batters to the tune of a .207 batting average last season.

2B Christian Lopes – The middle infielder struggled in his first go round at New Hampshire over 34 games last season. But even with a sub-.200 batting average, the 23-year-old maintained a very good strikeout to walk rate. Lopes will get another shot at Double-A in 2016 to return to form as the doubles machine he was at the lower levels of the minors.

2016 Outlook:
The Fisher Cats will be an improved team from last season, but I’m unsure if it will be significant or if their record will necessarily reflect that. The rest of the Eastern Division is very good and for the most part getting better. The Fisher Cats will need fringe offensive prospects like Mitch Nay and Matt Dean to flourish and excel while their starting pitching rotation also steps up for them to make some noise in the standings.

This entry was posted in Uncategorized. Bookmark the permalink.