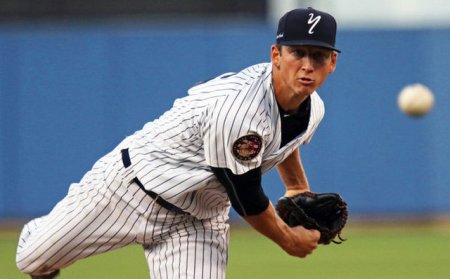 Prior to the season we’re previewing the 12 Eastern League teams in reverse order of last season’s record. Rosters won’t be finalized until the week before Opening Day, so my Players to Watch is pure speculation at this point.

Up next, we have the Trenton Thunder…

RHP James Kaprielian – The righty has impressed the Yankees’ brass since getting drafted out of UCLA in the first round last year. He features a quality four-pitch mix, but his maturity and makeup have put Kaprielian on the fast track to the Bronx.

SS Jorge Mateo – Mateo has been turning heads in spring training and if the young shortstop keeps tearing the cover off the ball, a promotion to Trenton after the All-Star break isn’t out of the question. In 2015 at Low-A Charleston and High-A Tampa the 21-year-old stole 82 bases, the most in the minor leagues.

OF Dustin Fowler – Fowler is the latest in a long line of highly-touted outfield prospects to come through Trenton. None have really lived up the promise since Brett Gardner, but Fowler may buck the trend. The Georgia native intrigues with great defensive skills in centerfield and the potential for power at the dish.

LHP Ian Clarkin – Clarkin’s biggest issue has always been health and 2016 will be no different. If the southpaw can avoid the injury bug and pitch to his potential, expect Clarkin to join Trenton in the second half of the season.

SS Tyler Wade – Wade struggled in his first go-round for the Thunder last season as he hit only. .204 in 29 games after a well-earned promotion from High-A Tampa. Wade will get another shot in Trenton hoping to make the proper adjustments and return to the hitter he’s previously displayed.

2016 Outlook:
The Thunder have finished with a sub .500 record only three times in the last ten seasons. Sure, they’ve had a few highly-rated prospects come through Trenton in that time but their success is based more on a philosophy from the Yankees’ organization. Simply put, the Yankees will fill their upper minors with older and solid minor league veterans to guarantee teams that stay competitive for the whole season. 2016 won’t be much different either as Trenton should once again hover around the 71 win mark.