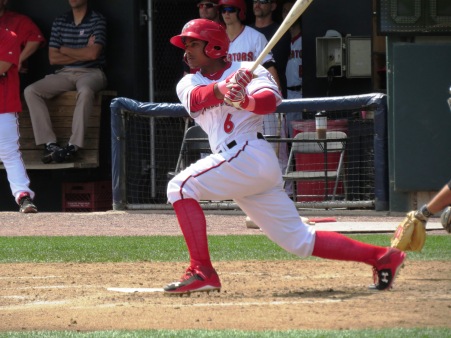 Wilmer Difo will bring his speed and aggressive approach at the plate back to Harrisburg in 2016.

Giolito is obviously the stud of the group, but who knows how long he’ll be in Harrisburg. The other four starters though should be here for the whole season barring injuries. Lopez and his tantalizing fastball will pitch in April for the first time in his professional career.

A very veteran group returns to City Island however just like last season, the last three outs may be the toughest to get for this unit. Gutierrez, who saved 24 games in the Major Leagues, may just be the guy that stabilizes the back end of the bullpen.

Kieboom will look to go the whole season healthy to return to the form that he showed in 2014 at Hagerstown. The former Clemson catcher will be under the tutelage of another former one in manager Matt LeCroy. Jeroloman will do what he does: show up, work hard every day, and give these young pitchers stability behind the dish.

Despite Dusty Baker saying he needed to get more reps at second base, Difo will return to Harrisburg to man the shortstop position. Sanchez should be the everyday third baseman after coming off an offensive surge at the end of last year and a monster Winter Leagues and WBC qualifier. Perez and Dykstra are likely the utility players with their ability to play all over the diamond.

Bautista will bring blazing speed and an ability to put bat to ball in his first taste of Harrisburg after being aggressively promoted following just 52 games at High-A Potomac last season. Keyes makes the most sense for the DH on this roster, but the first 14 games of the season are against National League opponents so he should see some time in the outfield and at first base early.

The Senators’ roster by the numbers

Of the 25 players on the active roster…