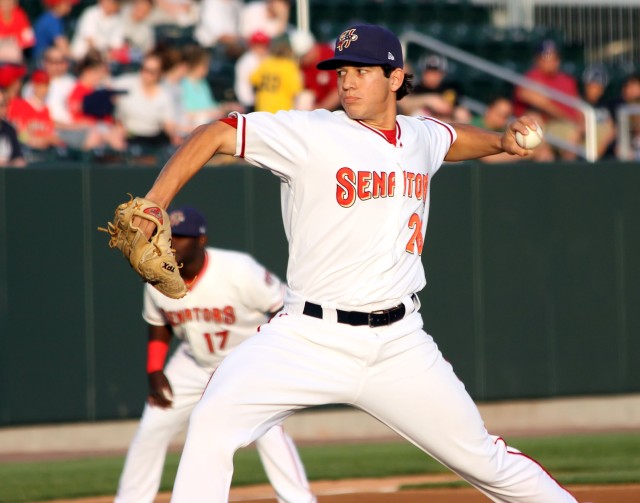 It had been eight years since the Senators made the playoffs when they qualified for the postseason in 2010. Thanks in no small part to the ace of the staff, Tommy Milone, a fierce competitor who pitched to a 12-5 record with a 2.85 ERA in the regular season. The southpaw also started the first game of the division round as they beat Altoona 10-5 for their only victory of the series.

Milone had a solid, but unspectacular collegiate career at USC before being selected by the Nationals in the 10th round of the 2008 draft. In today’s world of scouting for young arms that can throw near 100 mph, Milone and his high-80s fastball often got overlooked and under-appreciated. He has command of all his pitches and an approach more suited to a 35-year old grizzled veteran than the 23-year-old minor leaguer he was with Harrisburg. Think more Eddie Harris, than Rick “Wild Thing” Vaughn in Major League.

But that’s not to say he didn’t have the stuff to put away hitters either. Milone led the Eastern League in 2010 with 155 strikeouts in 158 innings while surrendering only 23 bases on balls. His strikeout to walk rate is the best of any starting pitcher for Harrisburg EVER that accumulated any amount of substantial innings.

This entry was posted in Uncategorized and tagged Harrisburg Senators, Tommy Milone. Bookmark the permalink.