Time and distance have let some excellent and outstanding seasons slip away from our collective memory. Occasionally, I’ll highlight some of those seasons here.

First-round draft picks inherently carry lofty expectations. Organizations expect the player to not only become a future cornerstone for the team but hope they will become the next superstar.

Montreal expected big things from Josh McKinley when they selected him with the 11th overall pick of the 1998 amateur draft out of Malvern Prep and gave him a $1.25 million signing bonus. But the switch-hitting middle infielder had failed to live up to that promise in five seasons, including a disappointing 2002 campaign in Harrisburg where he batted a career-low .234 and committed 19 errors.

An ankle injury early in the season left McKinley less than 100 percent and hampered him trying to play catch up with his assimilation to Double-A. Worse, the defensive problems the 23-year-old had ending up affecting his offense as well.

“I’d go out there some nights and feel like I couldn’t get out. Other nights, I’d be worried about stuff, and I wasn’t even thinking in the box,” McKinley told The Patriot-News’ Andy Linker. “I need to worry about my at-bats. I can’t take a let’s see-what-happens attitude. I have to have a plan every at-bat.” 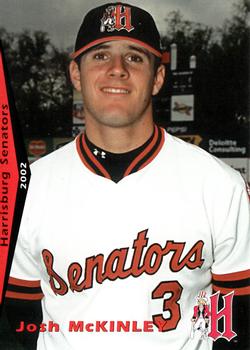 McKinley was determined to get off on the right foot in 2003, proving the previous season didn’t represent who he was as a player. He made huge strides during the winter months with hitting coach Frank Cacciatore in Orlando, honing his mechanics and approach at the plate. McKinley was then able to carry that over into spring training and his return assignment to Harrisburg.

The second baseman began the year by earning Eastern League Player of the Week honors. It was the first of many accolades McKinley would garner during a breakout season where he hit .288 with 33 doubles, 15 home runs, 82 runs scored, and 75 runs batted in. For his efforts, the Eastern League selected him for the All-Star Game, where he collected an RBI single during his appearance.

“This year has been a whole night and day experience from last year for me,” he offered to The Patriot-News’ Roxanne Moses.

His manager, Dave Machemer, had nothing but praise for McKinley and his work ethic with the opinion that it would see him reach the highest level.

“He’s not afraid to work,” Machemer said. “He’s here at 1:30 every day, hitting early and fielding early. And, he asks questions — and when you ask questions, you understand more.

“I’ve seen a lot of players come and go [to the majors] and, I’m telling you, Josh McKinley is going to play there.”

Machemer wasn’t the only one that believed that either. Cacciatore, then the Expos’ minor-league hitting coordinator, also projected him to be able to hit in the major leagues someday.

However, that day never happened for McKinley.

Along with pitcher Chris Young, McKinley was traded to the Texas Rangers right before the 2004 season began. He struggled at Class AA Frisco batting only .212 as they continued the experiment Montreal had begun, trying to convert him to a catcher or outfielder. The Texas organization saw all they needed to after 45 games and sent him back to Montreal in yet another trade.

McKinley finished the season back on City Island, but his numbers were never the same. That was the last he played professionally, and just like that, he was out of the game.

This entry was posted in Uncategorized and tagged Josh McKinley. Bookmark the permalink.