Without baseball on the horizon, I’m using this time to connect with former Senators (all of them can be found here).

We will relive some of their fondest memories and find out what they’re up to now. This week we’re staying on mound for John Simms. 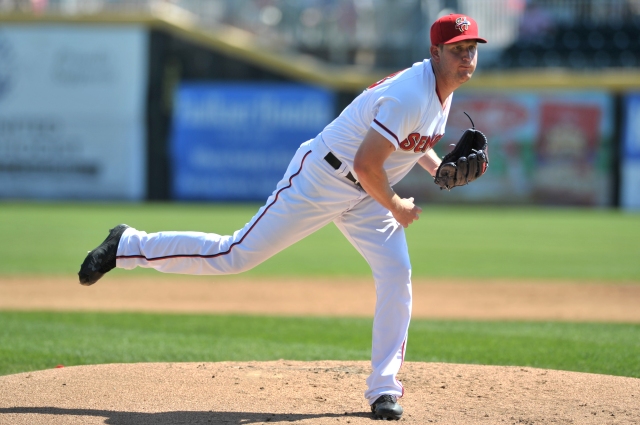 John Simms: After playing in 2018, I looked around, talked to other organizations about where they saw me for the next season. That was when I realized that my time in baseball was coming to an end. I’ve always said baseball will tell you when it’s time to go, but you have to be willing to listen.

Since my last game, I went to Driveline in Seattle to train, got married, went back to school at Rice University to get my degree, got my degree, and got a dog. Recently I started working at a medical device company. We specialize in orthopedic total joint replacements. I began working at their Houston location a few weeks after my graduation from Rice University, and a few weeks before coronavirus shut down hospitals in Houston.

JS: As far as a baseball life is concerned, I spent quite a bit of time in Harrisburg. During that time, I met some amazing people. First and foremost was Allison and Jimmy Creighton and their daughter Faith, who were my host family for my last two years. They are an amazing family that made my time in Harrisburg much better.

Anyone that knows me also knows that I loved to explore different places before and after games. But that really centered around coffee and food before and after games while I try and wind down and relax away from the field. A few of my favorite places had amazing people that I got to know. As a coffee ‘snob’ (according to my teammates), I found a home at Little Amps coffee, thanks to Peter Leonard and Aaron Carlson. I also found a few friends along the way. One of them was Tom McGrath, who was the cocktail director at Cork and Fork (forgive me if he isn’t there anymore) but Tom was awesome for letting me squeeze an order of food in before close and then hanging out and talking for longer than most people should want to.

As far as baseball is concerned, let’s just say that three out of my four groomsmen were road roommates from my time in Harrisburg. And my highlight was definitely starting the 2018 AA All-Star game in New Hampshire and finding a way not to get shelled and escape with a clean inning.

JS: Baseball has always been the sport I gravitated to. Specifically, pitching was more fun to me than anything else I ever did. The days after weren’t always fun, but actually competing was the most difficult yet rewarding challenge. I always enjoyed trying to beat hitters by thinking one step ahead of them. I always had a knack for understanding what a hitter was trying to do or couldn’t do. Now attacking that weakness was a different story because the higher I went, the ability to exploit a weakness got harder and harder to do. It also made the challenge that much more rewarding when games went well.

JS: My greatest day is probably not a realistic thing for me to identify. But I think there are a handful of games that mean more. I was the type of pitcher that had to get emotional to “lock-in” to the game. Anger and sadness were usually the easier ones to tap into well. Frustration could go either way for performing well or poorly. So my best games where I was completely locked in, also had something emotional wrapped around it. Whether it was the last day of the 2014 draft realizing that two of my closest friends had their dreams of playing pro ball shattered even though I believe even to this day that they were good enough. Another game I remember is the game I pitched after Hurricane Harvey had ravaged through my hometown of Houston while I was thousands of miles away. My final game for the Chiefs also stands out since I pitched well against the PawSox even though my hip was in agonizing pain all morning. Those games are etched in my mind as games where everything went right even while things around me weren’t always right.

JS: I asked for my release from the Nationals because I did not see a path for me to the major leagues with the Nationals. They obliged because otherwise, someone deserving from AA would have had to get sent down. AAA couldn’t keep me either because a player in MLB came off the DL and sent a trickle-down effect to the minors, and I was the guy without a home.

After that, I went to Driveline in Seattle to train while trying to stay ready for any potential calls. When I went there, they did a bio-mechanical analysis of my mechanics. They identified a potential area of improvement in my back leg directionality. We worked on it for a month, and during that time, I heard back from teams saying that they didn’t have room but might circle back before next year’s spring training. At that time, I realized that the reason there was a back leg issue was because of my hip surgery in 2014. When we tried to fix the problem, my hip screamed out in agonizing pain. With the pain, no fix in sight, and no concrete desire from other organizations, I heard baseball tell me it was time to move on with my life.

Thanks to John for taking the time out of his schedule to answer our questions.

This entry was posted in Catching Up with... and tagged John Simms. Bookmark the permalink.

3 Responses to Catching Up with…John Simms