Welcome to the fourth in a series of posts ranking the greatest home runs in Harrisburg Senators modern history (otherwise known as when baseball returned to City Island in 1987). 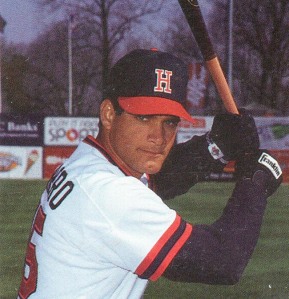 In the grand scheme of things, Oreste Marrero’s seventh-inning solo home run off London reliever Brian Warren didn’t really affect the outcome of the 9-1 Harrisburg victory or change the course of the Senators’ record-setting season.

But it did spark one of the most memorable moments on City Island.

The 1993 Senators were used to going through teams like a buzzsaw. Their 100 victories and Eastern League championship prove that beyond a shadow of a doubt. That didn’t mean opposing teams had to like it, but none made the mistake the London Tigers did that Sunday afternoon.

Losing 4-1 to Harrisburg in the seventh, Warren surrendered a three-run homer to Cliff Floyd on his first pitch and a Marrero solo shot later in the inning to turn a tight game again into a laugher. Since Warren couldn’t beat Harrisburg on the diamond, he tried another tack. The reliever buzzed a fastball high and tight by Mike Hardge’s head igniting a 12-minute bench-clearing brawl.

The fight was as lopsided as the games between the two teams had been.

Starting pitcher Joey Eischen roughed up two opposing players by home plate. Glenn Murray and Curtis Pride tag-teamed Tigers manager Tom Runnells, blindsiding him along the first-base line. And Tyrone Woods took on anyone who had a London uniform.

“The way I analyze it,” Harrisburg manager Jim Tracy told The Patriot-News’ Andy Linker, “we got to beat them five times this weekend, not four.”

“I don’t know what those London boys were thinking,” said Bill Madlock, the former four-time National League batting champion who was in attendance to play in a postgame softball game for Alzheimer’s research. “Those guys are just babies compared to Harrisburg.”

In a quest to become the first team in the Eastern League’s 77-year history to win four straight titles, the 1999 Senators found their backs up against the wall down 2-1 in the best-of-five championship series. You couldn’t tell they felt any pressure by the way they began the elimination Game 4.

Milton Bradley led off the home half of the first inning with a no-doubter that ricocheted off the scoreboard in right-center. It went downhill from then for Norwich starter Jason Beverlin, who had led the EL with 15 victories.

Harrisburg batted around, punctuated by No. 9 hitter Jason Camilli driving a full-count pitch over the wall in left for a three-run home run to give the Senators a 7-0 lead.

However, it wasn’t enough of a cushion as the Navigators chipped away at the lead until they took a 9-7 lead. But have no fear, Harrisburg came back to win 10-9 and set up a Game 5 that will live in infamy.

“It’s nice to get off to that big lead,” Camilli told Linker. “But then they started chipping away. It was, ‘C’mon, this can’t be happening.’ Then we got back to doing what we can do.”

Pitting one of the Eastern League’s best pitchers, Akron’s Jim Brower, against Harrisburg’s young and inconsistent lineup in the opening salvo of the Southern Division finals did not appear on paper like a recipe for success.

Throw the paper in the wastebasket.

Brower, who did not allow more than five runs in any of his 23 regular-season starts, was strafed for seven runs in three innings as Harrisburg raced out to the early lead and held off a couple of Akron threats to prevail 9-5.

Already ahead 2-0, Chris Stowers broke open the game with a three-run homer that capped a four-run second-inning rally. Two singles from Andy Tracy and Chris Schwab, followed by a doubled from Francisco Morales, plated a run and set the table for Stowers.

The 24-year-old outfielder lined Brower’s 2-1 pitch over the right-field wall pacing the Senators to a 6-0 lead they wouldn’t relinquish.

The Akron Aeros led not just the Eastern League, but all minor league baseball, with 93 victories during the regular season. Two one-run games over Harrisburg gave them the 2-0 advantage in the best-of-five series, putting them on the precipice of the finals.

But then Game 3 gave Harrisburg a glimmer of hope (more on that game in a forthcoming countdown). And Game 4 had the Senators believing in the upset when Glenn Davis continued to put the team on his back.

The first baseman, hitting .450 with seven RBI in the series, ripped a three-run home run to right in the second inning to ignite Harrisburg’s 5-0 victory over Akron. 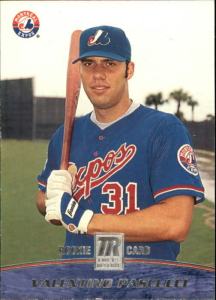 After Glenn Davis scorched Akron for four homers in the last three games, Aeros’ reliever Albert Garza had enough when he intentionally hit the first baseman with a pitch in the bottom of the eighth in Game 4. It was just another sign that a magical season was slipping away from Akron as Harrisburg forced a deciding Game 5 the previous day.

Angry glances and words were exchanged, but that was all Akron could muster in response to the shift of momentum swinging the series back to Harrisburg. The beaning did little to slow down the Senators in the do-or-die game.

Valentino Pascucci gave the Senators a 1-0 lead when he led off the second inning by driving Mike Spiegel’s 1-1 pitch over the centerfield fence. The 6-foot-6 slugger wasn’t done with the Akron starter either.

The next inning, he came back up with one on and two out still facing Spiegel when he drove the offering over the left-centerfield wall. Jeremy Ware followed with a shot of his own as he crushed Spiegel’s next pitch, but by then, Pascucci had done all the damage the Senators would need as they skated to a 5-1 victory to reach the Eastern League finals.