Welcome to the fifth in a series of posts ranking the greatest home runs in Harrisburg Senators modern history (otherwise known as when baseball returned to City Island in 1987).

The first half of the countdown (Nos. 40 through 21) can be found here.

The road to a championship is as much about getting hot at the right time of the year. The 1996 Harrisburg Senators are proof of that.

Don’t get me wrong, it was a talented squad that earned everything they accomplished, but the Senators were an afterthought coming into the postseason. They won four of five from Bowie to end the regular season, yet still finished with the lowest win total among the four playoff teams.

“Everybody was saying we backed into the playoffs,” Brad Fullmer told The Patriot-News’ Andy Linker. “But when we finished the year well against Bowie, I was thinking, ‘Hey, maybe we can take some people by surprise.'”

First up for Harrisburg was the Trenton Thunder, then a Boston affiliate, who had surged to an 86-56 record, twelve games ahead of the Senators in the South Division. It didn’t matter much as the Senators dispatched the Thunder in four games.

Next up was the Portland Sea Dogs, who also won more than 80 games that season. Once again, that didn’t seem to matter. Harrisburg seized control of the series by taking the first two games in Harrisburg before heading to Maine, looking for their third Eastern League title in 10 seasons.

Up 2-1 in the series, the Senators went on the offensive early in Game 4. Nursing a 1-0 lead in the third inning, Harrisburg’s advantage swelled to three as Fullmer, with Jose Vidro on second with two outs, drilled a long ball off Portland starter Will Cunnane. For Fullmer, it was his third homer in the four games against the Sea Dogs.

That was all the runs the Senators needed as they clinched the title with a 6-1 victory over the Sea Dogs. The win completed a worst-to-first finish that hadn’t been accomplished in the Eastern League since 1987.

It wasn’t often the 1993 Senators had their backs against the wall. After all, this was a team that went an astounding 94-44, finishing 19 games ahead of the second-place Canton-Akron Indians. But that was the situation the Senators found themselves in after Canton topped Harrisburg in the opening two games of their best-of-five championship series at RiverSide Stadium.

After beating the Indians 5-2 in Game 3, Harrisburg needed to keep the pressure on in Game 4 to have any hope of claiming the title.

After the first two batters of the game were retired, Glenn Murray stepped to the plate to face Canton starter Mike Dyer. The power hitter worked the count to 2-2 before teeing off on a Dyer offering over the left-field wall to give Harrisburg the critical 1-0 lead before Canton even batted. The home run was the first allowed by the Canton staff in its nine postseason games.

But it wouldn’t be the last, as Tyrone Horne added a round-tripper for Harrisburg on the way to a 10-2 victory that tied the series and forced a deciding fifth game.

“The advantage they had, they lost,” Harrisburg manager Jim Tracy told Linker. “We have momentum, but there are nine innings left for the championship.” 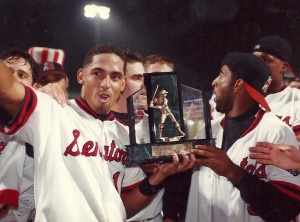 What was the bigger surprise in Game 1 of the 1997 Eastern League championship series? Light-hitting Trovin Valdez delivering the big blow to Portland’s chances or that Valdez was even penciled into the lineup each night?

Valdez had been finishing the season at Class A West Palm Beach when Harrisburg’s Ed Bady went down with a strained right hamstring in the next-to-last game of the regular season. Instead of going home to New York City, Valdez was a necessary component for the playoff-bound Senators.

But in the Southern finals against Bowie, the then 23-year-old Dominican struggled, batting .056 on only one hit in 18 at-bats. Yet, Harrisburg manager Rick Sofield kept sending Valdez out there every night.

In the opening game of the best-of-5 series against Portland, the outfielder substantiated his skipper’s faith.

Valdez turned a tight 3-1 Harrisburg lead in the sixth inning into an insurmountable 6-1 advantage when he turned on a pitch sending it over the short wall in left field.

This is a batter that, at that point in his career, had hit only eight home runs in 1,614 plate appearances. I’ll save you from doing the math – that’s one every 201.75 times he stepped to the plate. And none came in his previous 13 regular-season games with Harrisburg that year. Heck, Valdez only had two extra-base hits, both doubles, in his 47 plate appearances with the Senators.

The Harrisburg Senators and Erie SeaWolves were two evenly matched teams during the 2013 season. The squads battled down to the final day of the regular season to see who would finish as the top seed in the Western Division as they finished only a game apart in the 142-game schedule.

So it was no shock to see the teams deadlocked 4-4 headed to the ninth inning in the opener of their best-of-five Eastern League semifinal series.

Erie had moved ahead in the seventh when Brandon Douglas beat a throw home on a fielder’s choice grounder and survived a massive collision with Senators catcher Brian Jeroloman. But Harrisburg scratched across the equalizer in their next at-bats on a Billy Burns’ sacrifice fly to set up the dramatic final frame.

The SeaWolves turned to their closer Melvin Mercedes, who had 23 saves that season, to get three outs. In four previous appearances against the Senators, Mercedes hadn’t allowed a hit, let alone a run.

Steven Souza, Jr. changed that quickly with one swing of the bat on an 0-2 count as he led off the frame with a solo home run to power the 5-4 win and gave the Senators a 1-0 series advantage.

It was little more than a foregone conclusion that Akron, which led all of the minor leagues with 88 regular-season wins, would easily handle the upstart Senators in their first-round playoff series.

Victories by the Aeros in the first two games of the series only added to that belief.

But Glenn Davis single-handedly jumpstarted the Harrisburg offense in Game 3 and brought the Senators back from the dead. Davis, who was a late-season acquisition from the Yankees organization, became the first Senator in the modern era to homer twice in a playoff game.

First, he tied the game at 1-1 with a long solo home run off Akron starter Jamie Brown’s first pitch of the second inning. Davis drove Brown’s final pitch even farther over the right-field wall for a two-run homer in the fifth inning to cap a four-run rally that gave the Senators a 6-1 lead in front of a raucous 5,158 at RiverSide Stadium.

“That first one, it was a fastball that I got on top of,” Davis told Linker. “The second one was a slider. I hit that one pretty good.”

The performance and victory would keep the Senators’ hope alive for another day (see #22) and yet another (see #21).