Welcome to the sixth in a series of posts ranking the greatest home runs in Harrisburg Senators modern history (otherwise known as when baseball returned to City Island in 1987). Just a reminder that this is one man’s humble opinion. I’m sure I’ve missed ones you remember more fondly, but this is my list. 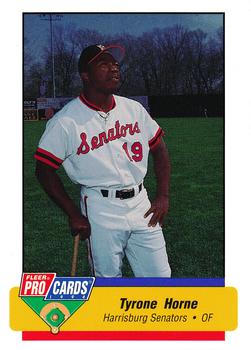 A stellar regular season doesn’t mean much if the carriage turns into a pumpkin once the clock hits twelve in the postseason. After winning an Eastern League-best 88 victories, the 1994 Harrisburg Senators looked in danger of getting swept out of the playoffs after dropping the first two games in their semifinal matchup with the Bowie Baysox.

Harrisburg staved off elimination in Game 3 with a 2-1 victory and would need a repeat performance to force a fifth and deciding game back home on City Island. Tyrone Horne made sure the Senators returned home to play, and not just pack up their belongings and say their long goodbyes.

The left-fielder drove in a season-high four runs on three hits, including a two-run home run to give the Senators a 7-3 lead in the 7th inning they wouldn’t relinquish.

“We were down,” Horne said to The Patriot-News’ Andy Linker. “But we had faith in ourselves.”

Facing future MLB closer Armando Benitez, Horne turned a tense 5-3 game into a comfortable four-run lead for the Senators demolishing a fastball over the 50-foot scoreboard in right-center.

When Geoff Blum stepped into the RiverSide Stadium’s batter’s box in the eighth inning, he already had generated a productive day at the plate.

In the first inning, the infielder singled off the right-field wall, coerced a broken-bat double to right in the third, and tripled down the right-field line in the sixth. That left Blum a home run away from becoming only the third Senator to hit for the cycle, joining Matt Stairs in 1991 and Jose Vidro in 1996, since baseball returned to City Island in 1987. However, his feat would be even rarer as Blum was poised to hit for the cycle in order.

So, when Blum’s spot in the order came up against New Haven reliever Heath Bost was he trying to make history with a long ball? “To be honest with you, yeah, I was,” Blum told Linker.

The then 25-year-old worked the count from Bost to 2-1. Blum sat on a fastball, thinking the right-hander didn’t want to fall behind 3-1 in the at-bat and rocketed the offering over the right-center wall.

“I got lucky and guessed right,” Blum said.

Besides the individual feat, the long ball put the Senators ahead over the Ravens on their way to the 3-2 win with Blum driving in all three runs. The victory was also Harrisburg’s 11th in the last 15 games as it chased Trenton and Akron during the remaining month for a playoff spot.

In a short five-game playoff set, Game 3 is typically the one that changes the course of the series. Go up 2-1, and you’re only one win away from clinching. Go down 2-1, and now you have to win or go home for two straight games. It’s a mental burden that weighs on a team’s collective mind.

During the 1998 Eastern League Championships, Harrisburg and New Britain were deadlocked at a game apiece, setting up the critical Game 3.

The Senators came out of the gate strong, scoring two in the top half of the first inning to knock the Rock Cats on their heels. But not everyone in the Harrisburg dugout was pleased with only two runs as they had the opportunity to blow it open early.

“They shut the door on us pretty quick,” manager Rick Sweet said. “I wasn’t happy we only got two in the first inning. I wanted more. I didn’t think two would be enough.”

The skipper was right. Two runs weren’t going to be enough to win this night, but three would do the trick.

That came courtesy of Geoff Blum as he led off the sixth inning with a solo shot off a fastball from New Britain starter Jason Bell. In the end, the long ball made the difference for the Senators as they hung on for the 3-2 victory and putting them one win away from claiming their third straight championship.

“It turned out to be a bigger run than we anticipated,” Blum said.

There’s nothing quite as draining as surrendering runs in the top half of the first inning and putting your team in a hole before they even get a chance to bat.

In 1997, Hiram Bocachica was a master of ruining the opposing pitcher’s mood and his team’s chances. The middle infielder homered to lead off the game four times during that regular season, with three of them coming on the game’s first pitch.

The fourth time he did it that year, in Game 3 of the Eastern League Southern finals, was undoubtedly the most important.

Harrisburg never trailed in the pivotal contest after Bocachica deposited Bowie starter Chris Curtis’ initial offering off the third tier billboards in left-center. The Senators would go on to win 5-3 to take control of the series.

“You’re up 1-0 before you even throw a pitch,” Harrisburg starting pitcher Trey Moore said. “That sets the tone of the game.” 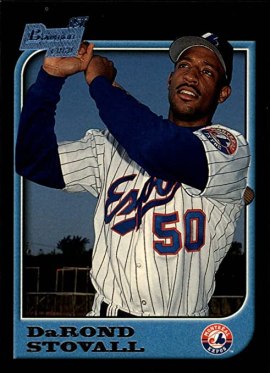 It had been six days since the Senators won their last game. For a team trying to secure the second and final spot in the Eastern League Southern Division playoffs, it was not an ideal time to ride the skids of a five-game losing streak. Fortunately for Harrisburg, Canton didn’t seem motivated to take advantage as they also slumped into the season’s final days, leaving the Senators with a magic number of three games.

Individually, DaRond Stovall wasn’t doing much better during that same stretch. The outfielder was mired in a 2-for-21 slump and subsequently benched after striking out three times the previous game.

But as the Thursday night contest against the last place Bowie Baysox went into extra innings tied at 1-1, Stovall was used as a pinch-runner. Two frames later, his spot came up in the batting order with the bases empty and two outs in the 12th inning.

Stovall deposited the 1-1 pitch from Bowie reliever Matt Grott over the left-center wall to give Harrisburg the 2-1 walk-off victory and a tighter hold on the remaining playoff spot.

“I thought he was a little tired,” manager Pat Kelly told Linker. “And [outfielder Jesus] Campos has played well this year; this was a chance to get him into the lineup. As it turned out, this gave us a fresh at-bat in the 12th inning.”