Welcome to the seventh in a series of posts ranking the greatest home runs in Harrisburg Senators modern history (otherwise known as when baseball returned to City Island in 1987). Just a reminder that this is one man’s humble opinion. I’m sure I’ve missed ones you remember more fondly, but this is my list.

If this countdown were for most viewed Harrisburg Senators’ home runs, Bryce Harper’s walk-off bomb against the Trenton Thunder would be tops on the list without a doubt.

First of all, you have an announced attendance of 7,177 for a fireworks Friday night game against the Double-A affiliate of the both loved and hated New York Yankees. Over the years, I’m sure the number of people who claim they were there has also at least doubled.

Throw in that it comes off the bat of the overall No. 1 2010 draft pick and top prospect Harper, and the highlight repeated on SportsCenter all night and next day. The Senators’ official video has 71,564 views. Some fan along the third-base line has a video on YouTube with over 11,000 views. Mine (yes, you heard that right) has 8,583.

Harrisburg was down 2-1 entering the bottom half of the ninth inning when Leonard Davis singled with one out bringing the wunderkind up to bat.

After falling behind 0-2, Harper worked the count to full before he crushed a hanging curveball from Ryan Pope over everything in dead center. For Harper, it was his first and only home run he’d hit in the friendly confines of then Metro Bank Park.

2011 was the first season I covered the team day in and day out from the press box, and I took precisely one video from my phone all season. At that moment, you just felt like the 18-year-old kid was going to do something special.

“It’s always nice to win a ballgame. It’s always fun to walk a team off and go enjoy it with your team,” Harper told The Patriot-News’ Andy Shay. “Leonard Davis was on fire tonight. Having him in front of me, I think that was huge. He had three hits tonight. If he’s not on base, I don’t know if it’s the same kind of situation.” 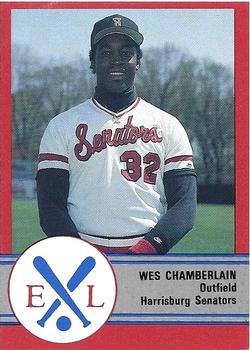 I’ve written before about Game Threes and the contest’s inherent pivotal nature in a five-game series. Go up 2-1, and you’re only one win away from clinching. Go down 2-1, and now you have to win or go home for two straight games. It’s a mental burden that weighs heavily on a team’s collective mind.

Now add in getting down 2-0 early in that game, and you can see how the pressure to respond with runs becomes its own living thing with each inning that goes by without scoring.

In times like that, you need the guy that isn’t fazed by the moment to step up. It also doesn’t hurt if he was the Eastern League Most Valuable Player either.

A one-out single by Tony Longmire in the fourth inning set the stage for Wes Chamberlain, who crushed a Greg McMichael slider nearly 400 feet over the left-centerfield fence to erase the two-run lead Canton had built. It brought the Senators back to even and let everyone in the Harrisburg dugout breathe a sigh of relief.

“That was a big point,” Harrisburg starting pitcher Keith Richardson said to The Patriot-News’ Skip Hutter. “McMichael was throwing really great with great location. It made a big difference for us.”

Two frames later, Chamberlain delivered an RBI single that gave the Senators a 3-2 lead and opened up the floodgates. Harrisburg would go on to the 14-4 victory over the Indians, giving them the upper hand in the series.

“When you’re staying within yourself, you are going to have success,” Chamberlain said. “I try not to get cheated on my swings, but I’m not chasing the pitchers’ pitches as much. I think the whole team is playing within itself.” 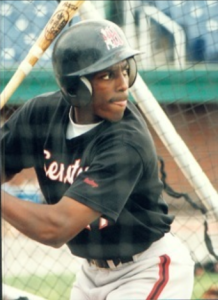 Banged up and in a slump.

That would best describe Vladimir Guerrero as the Senators began their 1996 Championship Series against the Portland Sea Dogs.

Despite an MVP season where the outfielder batted .360 and slugged .612, the 21-year-old Dominican hurt his right shoulder late in Game 2 of the Southern Division playoffs and sat out Game 3 of that series with the injury. When he did play, Guerrero struggled, going 1-for-12 against Trenton.

So, when he ripped a double in the first inning of Game 1 off Portland starter Tony Saunders, all indicators signaled Guerrero was back and healthy. Three innings later, he removed any remaining doubt with a grand slam that highlighted a nine-run fourth inning giving the Senators a 10-3 lead on their way to a 15-3 rout.

“Sometimes during the season, we let Vladdy do all the work,” Senators manager Pat Kelly told the Patriot-News’ Andy Linker. “But right now, we’re a better team than we were in the regular season, and that’s catching people by surprise.”

“We were waiting for that,” Jose Vidro said of Guerrero. “We need that guy. When he’s hot, we’re going to win.” 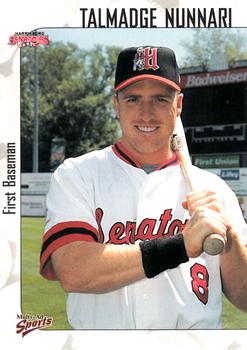 For seven innings, the Erie SeaWolves held the Harrisburg Senators’ bats at bay as they built up a 6-2 lead in Game 1 of the Southern Finals. It shouldn’t have been surprising, though, as the SeaWolves won 81 games while locked in first place since May 28, and beat the Senators in 10 of 16 head-to-head games during the regular season.

But then the Senators, beginning their quest for their fourth straight Eastern League championship, started the comeback. Home runs by Andy Tracy and Brad Wilkerson (see #26 on our countdown) cut the SeaWolves’ lead down to 6-5 with only three outs left against Erie closer Mike Bovee.

Milton Bradley reached first as he led off the ninth inning with a hard grounder to shortstop Chuck Abbott ruled an error. The mercurial outfielder advanced to second base on a sacrifice bunt by Jamey Carroll, bringing up Talmadge Nunnari.

A base hit probably scores the tying run, but Nunnari had other ideas.

The first baseman lined Bovee’s first pitch of the at-bat over the wall in left-center, giving the Senators a 7-6 lead they’d hold on to despite some nervous moments in the bottom half of the frame to secure the win.

“It’s crucial to win any game in a short series,” manager Doug Sisson told Linker. “But if we had lost, I would have said this one doesn’t matter.”

The Harrisburg Senators and Akron Aeros entered the last day of the regular season tied with 74-67 records and one playoff spot still up for grabs.

Win and the worst that can happen is a one-game playoff. Lose, though, and you leave your fate to the other team and the baseball gods.

So after spotting Bowie four runs in the early going of the must-win game, the Senators finally found their groove against Baysox starter Juan Figueroa in the sixth inning. Henry Mateo and Josh Reding singled before Noah Hall walked to load the bases. Jeremy Ware dumped a change-up into left-field, cutting the lead in half and chasing Figueroa from the game.

Eibey went back to the well for another slider, but this time the result was drastically different as Hodges crushed the ball over the center-field wall for his first Class AA homer and a 5-4 lead.

“He came back at me with the same slider,” Hodges told Linker. “I picked it up and had good extension on it.”

Harrisburg would tack on another two runs before recording the final out, but for all intents and purposes, Hodges homered his team into the one-game playoff which the Senators would win 8-1.

“With what this game meant, that’s probably the biggest swing for us since the last game of last year,” said manager Doug Sisson.