The greatest home runs in Harrisburg Senators modern history: No. 1

Welcome to the last in a series of posts ranking the greatest home runs in Harrisburg Senators modern history (otherwise known as when baseball returned to City Island in 1987). Just a reminder that this is one man’s humble opinion. I’m sure I’ve missed ones you remember more fondly, but this is my list.

For the 3,171 fans in attendance on that fateful Monday night at then RiverSide Stadium and the thousands more listening to the broadcast, no one will forget the way the bottom of the ninth inning unfolded to give the Senators their fourth straight Eastern League championship.

The Norwich Navigators plated two insurance runs in the top half of the inning to push their advantage against Harrisburg out to a seemingly insurmountable 11-7 lead. After reliever Oswaldo Mairena recorded the last out of the previous frame, Norwich manager Lee Mazzilli chose to stay with the southpaw for a match-up against the Senators 4-5-6 hitters, all left-handed. 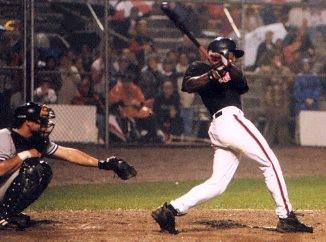 But looming in the Norwich bullpen was Joe Lisio, the hard-throwing right-hander who led the Eastern League with 33 saves in 1999, in case the Senators started a rally.

The rest they say is history.

What follows is an oral history of those memorable six minutes on City Island recreated with the help of Geoff Morrow’s 10th year anniversary stories of The Slam, Andy Linker’s One Patch of Grass, television coverage from ABC27’s Gregg Mace, and interviews with Milton Bradley from the 2000 Senators’ team program and Andy Tracy by the author.

Andy Tracy: It was amazing. I think it was the last night we had to play. We got stuck in a hurricane up in Connecticut. We got back home and it rained all night.

Todd Vander Woude (former Senators’ General Manager): Everyone had enough of the rain delays, and I remember talking to the umpire crew chief before the game. He had a great line, saying, “Unless we see Noah coming on the Ark, we are going to play this game.”

Barry & Margie Fealtman (Senators’ fans): We were sitting in the red seats behind home plate. Next to us were pitchers from the opposing team. We overheard them talking about winning the championship. As the inning grew closer to the end of the game, they decided to go down to the clubhouse and put the champagne on ice so it would be ready.

Andy Tracy: Milton went into the clubhouse during the ninth and was already out of his clothes and only in his boxers…He had his head down. He was very disappointed. It had been a rough year for him, and he gets really emotional about some things.

Steve Phillips (Senators’ hitting coach): He said he couldn’t watch right now. I said, “Well, we’re going to get some baserunners and you never know what’s going to happen.”

Barry & Margie Fealtman: We were standing by the Norwich bullpen when a good-natured Senators fan was leaving the game. He looked over at the visiting pitchers and congratulated them on winning the championship. A pitcher looked up and said, “Thanks, but the game’s not over yet.” How right he was.

Todd Vander Woude: As usual with my duties at a home game, I was not able to see much of the game. But I found myself standing at the first-base gate in the bottom of the ninth. I remember talking with Mayor Reed and Gregg Mace, joking that all we needed was a grand slam to tie the game.

Mark Mattern (former Senators’ broadcaster and Assistant GM): When the ninth inning started, I told my radio partner, Brad Sparesus, that if we get the tying run on base, I will go down the field for possible post-game interviews, all the time thinking, ‘Right, like that has a chance of happening.’ Anyway, the inning unfolds, I head down to the gate at the first-base dugout and finally realize how heavy the rain is.

Andy Tracy: I was just trying to get on base. I wasn’t thinking about a comeback.

Todd Vander Woude: We ended up getting a hit and a couple walks to load the bases, and (Jason) Camilli hit a ground ball to third, the third baseman got hurt and one run scored.

Milton Bradley: I think that was to my advantage. He was in a groove, throwing good. He was getting batters out. He was making good pitches. He had his rhythm going. Then the injury breaks it. Now (Lisio) has to stand out there, holding the ball with the rain coming down on him.

Todd Vander Woude: The lengthy delay due to the Norwich player getting injured seemed to really get the crowd going and the stadium rocking. Fans were pounding on the aluminum seats to make even more noise.

Milton Bradley: I heard one voice coming from the crowd saying “You can do it. We believe in you. Four-in-a-row. We are still here.” It was weird, that was all I heard. I said to myself, “I need to hit the ball hard.”

Brad Sparesus (Senators’ broadcaster): “It comes down to this. This incredible season. Three balls and two strikes. Two outs, bottom of the ninth. There’s a shot toward right field. Back is Glass at the wall. GONNNNNNNE!!! Grand slam!!! Grand slam!!! The Senators are Eastern League champions again!!!”

Joe Lisio (Norwich closer): When I let go of the pitch, I knew it was a mistake. I just missed my spot.

Milton Bradley: I just wanted to hit it. It was fastball middle-in. I hit it. When you make good contact, you don’t feel it. I was just watching it. It was on a line.

Doug Sisson: When Milton hit the ball, I knew we were going to tie the game because I knew Camilli could score on it. I saw (Norwich outfielder) Chip Glass going back…I thought it was going to be a double because the trajectory was too low. It was so foggy and the rain was coming, and you can never tell with those lights out there.

Andy Tracy: It wasn’t a towering home run. I thought it was off the wall, and Camilli could run so I thought he’d score [from first]. It was so rainy and damp, but he got it. It barely cleared the wall.

Wayne Rosenthal (Senators’ pitching coach): I was just yelling get up, get up, get up. When I saw Glass give up and that ball went over, it’s the greatest feeling in the world. I couldn’t help myself. I just went nuts.

Wally Ream (Senators’ fan): My wife, Kathy, our friend, Krysten Repman, and I were sitting just under the press box in Section 106. We remember seeing Milton Bradley’s hit go deep into the rain and fog, and at first we weren’t sure it cleared the fence. When we realized it did, everyone erupted in cheers and hugs.

Mark Mattern: Bang, that special sound when a ball hits the bat just so. It was hard for us to see, but it was gone. General manager Todd Vander Woude and I push through the gate, and maybe I pushed a little too hard. Woude ended up on the ground, but I had no time to worry about him then.

Todd Vander Woude: When Milton hit the ball, by the sound of the ball hitting the bat, I knew it was absolutely hit on a rope. It hit the second-tier billboard in right, and basically I could not walk. I was numb. To this day, I still think Mattern pushed me to the ground and stepped on me to get on the field.

Jeremy Salyers (Senators’ reliever): Somehow that ball got over the fence. It’s the most amazing thing I’ve ever seen.

Milton Bradley: I didn’t know if it was going to stay up. I was going up the baseline and I was numb. I remember watching the ball fly and watching Glass. His shoulders slumped, I knew that was it. It was like the Twilight Zone. I ran around the bases. I didn’t realize we had won. I didn’t realize it until I rounded third and saw everyone crowded around home. I realized I didn’t come to Harrisburg in vain.

Joe Lisio: My heart went down to my stomach because I knew we had lost the game…To this day I still think about it. It was the worst experience I ever had in baseball, in life, by far.

Mark Mattern: I look to my left, and I swear the entire team was out of the dugout and about four feet off the ground.

Todd Vander Woude: The team was just going nuts on the field, and the crowd was the loudest I can ever remember.

Christian Parker (Senators’ winning pitcher): I put my head between my legs and started crying. This is an unbelievable thing.

Mark Mattern: I finally get to Milton and he starts to cry as he is talking to me, and, of course, I start to cry. I don’t think I ever cried on a broadcast before or since. Kind of ironic for me as a broadcaster, the greatest moment in my sports life, and there I am, with the hero of the moment, too choked up to speak. It was great.

Milton Bradley: I just wanted to do something. It was kind of my way of saying thanks to the fans of Harrisburg, my teammates. That was for them, I was secondary right there.

Jamey Carroll: This is unbelievable. I couldn’t be any happier for Milton Bradley. The guy has been through the roughest times, and he has come through for us time and time this year. Our team has been through the most amazing stuff all year long. Nobody believed in us except for ourselves. We persevered. People were saying we were the worst team ever to come through here. Maybe we proved them wrong tonight.

Steve Reed (Harrisburg Mayor): We’re a swing away from extinction and he hits a grand slam. This is the most historical hit in Central Pennsylvania baseball history. No question about it. One for the storybooks.

Doug Sisson: With apologies to my daughter, this could be the greatest day of my life.

Andy Tracy: We pretty much partied all night, and the fans stayed with us on the field.

Todd Vander Woude: I was at the stadium until about 5:30 a.m., couldn’t sleep and ended up doing many local radio shows at 7 a.m.

Milton Bradley: I always dreamed of something like this and I never thought it would happen.