A Day in the Life of Jimmy VanOstrand 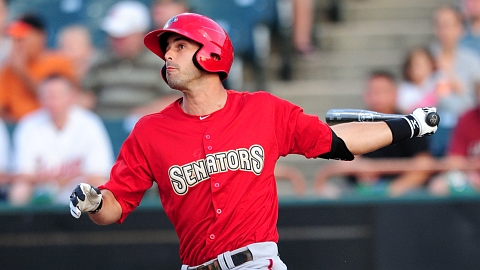 9:30 AM
Jimmy VanOstrand is awakened from a deep slumber. Most 28-year-old men don’t need to set an alarm to get up on a Saturday, but for VanOstrand it’s a necessary evil of life in the minor leagues. The previous night VanOstrand went 2-for-4 including his fourth home run of the season to help the Senators defeat the New Hampshire Fisher Cats, 7-6. The two teams are back at it again later tonight at Metro Bank Park with a special appearance by “The Mouth of the South” Jimmy Hart for Wrestling Night, but for now all VanOstrand can think about is breakfast. Unlike most of his teammates, VanOstrand doesn’t stay with a host family or in an apartment. Instead, his home away from home is at the Staybridge Suites Harrisburg-Hershey and he has to make sure he gets down to the lobby before the hotel staff starts taking away the complimentary breakfast buffet.

10:30 AM
After starting his day off with some hearty nourishment, VanOstrand heads back to his room to kill time before he has to head to the field. He surfs around the internet, checks his e-mails, and plays his guitar for a little bit as he tries to relax. If there are any hotel guests in either of the adjoining rooms, odds are probably good that they can recognize the melody to Florida Georgia Line’s “Cruise” as VanOstrand strums out the chords.

1:15 PM
VanOstrand pulls off the Market Street Bridge and onto City Island before winding his way around Championship Way. He enters the back parking lot and slides into a space next to manager Matt LeCroy’s pickup truck. As he enters the locker room, he takes a glance at tonight’s starting lineup and finds his name slotted into the fourth spot of the batting order as the designated hitter. Harrisburg will be facing the Blue Jays’ 19th ranked prospect, Sean Nolin, who less than a month ago made his MLB debut against the Baltimore Orioles. Now, the southpaw was back in the Eastern League and ready to take on the first-place Senators.

1:25 PM
Some guys like Steven Souza and Sandy Leon are already here and sitting in front of their lockers. Others will arrive one by one as each of the Senators arrives at the ballpark for their normal workday. VanOstrand heads to his two-foot wide locker and starts changing for practice. He pulls shorts on and slips his dri-fit practice shirt with the number #16 ironed on the right sleeve over his head.

2:05 PM
VanOstrand grabs his batting gloves and bat as he heads out the back entrance of the locker room that leads through the Senators’ dugout. He makes his way in foul territory past third base and left field before he gets to the door that leads him to the batting cages underneath the Senators’ Team Store and offices. Hitting coach Eric Fox finishes working with Destin Hood on some drills and it’s now VanOstrand’s turn. The outfielder/first baseman ducks through the mesh netting at the back of the cage and stands a couple of feet away and to the side of Fox. VanOstrand stretches his back with a few practice swings and then settles into his slightly open stance waiting for the first soft toss. Fox flips a ball to VanOstrand who whacks it into the opposite end of the cage as the sound of wood striking leather echoes throughout the small confines.

2:45 PM
VanOstrand makes his way back to the clubhouse to cool off and grab a snack to eat. He pours himself a glass of milk and fixes a peanut butter and banana sandwich with honey that he eats while sitting on the metal folding chair in front of his locker.

3:45 PM
All of the position players head back out to the field so strength and conditioning coach Tony Rogowski can run them through their stretching routine. That is quickly followed by a brief infield/outfield practice as LeCroy puts them through their paces like a well-oiled machine at the sequence and routine. Starting first baseman Justin Bloxom takes the majority of reps at first base, but VanOstrand also spends some time there as that has been his primary defensive position with the Senators. Next, the rounds of batting practice begin and VanOstrand is in the second group along with Sean Nicol, Souza, and Leon. From about thirty feet away, coach Melvin Dorta delivers pitch after pitch to the group as each member shuffles in and out of the cage quickly.

5:00 PM
Batting practice is over and VanOstrand collects a few stray balls and places them in the ball cart before heading back into the clubhouse with the rest of the team. On days when VanOstrand isn’t starting, he’ll usually lift weights at this point. But since he is batting cleanup tonight, he heads to the players’ lounge to grab a light pre-game meal that consists of a salad with grilled chicken. He sits down at the card table and gets dealt into a rousing game of Pluck while he stabs at the leafy lettuce on his styrofoam plate with a fork.

5:45 PM
VanOstrand jumps into the shower quickly and dries off before he starts getting dressed in the Senators’ home whites. To complete the look, he dons his red cap with the script H and pauses for a split second to collect his thoughts.

6:30 PM
With thirty minutes before game time, VanOstrand reemerges from the Senators dugout and heads down the first-base foul line. Along the way, a few youngsters catch his eye and he stops to sign a baseball, a program, and a few other items. He begs off as the crowd begins to swell with fans of all ages looking for an autograph. While he’d like to stand there all day, VanOstrand has work to do as he prepares for the game. In a routine every ballplayer has used to warm-up, VanOstrand performs some hamstring stretches followed by sprints to loosen up his legs and get ready for the game.

7:00 PM
VanOstrand lines up on the edge of the grass and removes his cap as the National Anthem is sung. Moments later, Senators’ starting pitcher Blake Treinen delivers the game’s first pitch, a ball high and tight. As designated hitter, VanOstrand will stay busy on the bench watching the opposing pitcher and taking cuts off the makeshift tee set up underneath Section 111.

9:45 PM
The Senators’ bullpen blows a 1-0 lead as the Fisher Cats score four times in the last two innings to win 4-1. Individually, VanOstrand struggles at the plate as he goes hitless in four at-bats while the rest of the team doesn’t fare much better as they manage only five hits on the night.

9:55 PM
VanOstrand heads to the training room so he can receive treatment from Jon Kotredes immediately after the game. Ice is placed on various lower body injuries and VanOstrand is sent on his way. He grabs a bite to eat while icing before he heads once again to the showers.

11:00 PM
VanOstrand arrives back at the hotel and since everyone he knows is predominantly on the west coast, it’s a perfect time to get in touch with them and catch up. He calls his brother David and they talk about their family, the newest songs that caught their ear, and for a fleeting minute, the game. After hanging up with his brother, VanOstrand logs into his Netflix account looking for a new release to keep his attention tonight, but nothing piques his interest. Instead he turns his attention to baseball boxscores from across the country. In VanOstrand’s eight-year career, he has made many friends and now is when he checks up on them to see how they did in their games. One of the boxscores he studies closely is from the Astros-Cubs game as he’s looking for pitcher Bud Norris and second baseman Jose Altuve, both former teammates when VanOstrand was with the Houston organization, and how they did in their afternoon game at Wrigley Field.

12:30 AM
With a two o’clock game slated for tomorrow afternoon, VanOstrand decides to shut it down and head to bed. After all, he has to make sure he’s up in time for breakfast.

This entry was posted in Uncategorized and tagged Harrisburg Senators, Jimmy VanOstrand. Bookmark the permalink.