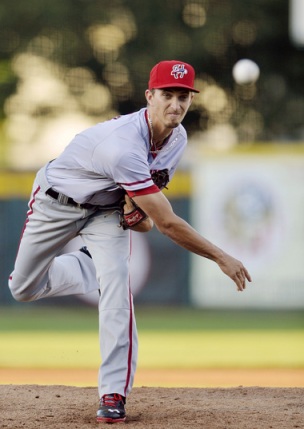 Earlier today, Baseball America released the Washington Nationals’ Top 10 Prospects along with detailed scouting reports on each player. Here is the list along with a note on each player taken from the article.

1. Lucas Giolito
“He also throws a 12-to-6 power curveball in the 84-86 range that Nationals pitching coordinator Spin Williams has called one of the best curves he’s ever seen when Giolito throws a good one. It has late bite and excellent depth, projecting as a plus-plus pitch with a chance to be a second 80 offering.”

2. A.J. Cole
“Cole pitches predominantly off his explosive fastball, which sits at 94-95 mph and regularly touches 97. His fastball command is solid, but it remains better to his arm side than his glove side.”

3. Brian Goodwin
“He has worked to eliminate the double toe tap that disrupted his timing, but his approach can still be segmented, causing his swing to be late. If he can get himself into better hitting position more consistently, he could become a slightly above-average hitter, because his hands really work.”

4. Matt Skole
“The Nationals helped him get more out of his huge frame by minimizing his leg kick, solidifying his base and improving his balance. He showed an improved ability to stay back and drive breaking pitches the other way in his last healthy season.”

5. Robbie Ray
“Ray attacks hitters primarily with his heater, which ranges from 91-96 mph, averaging about 93. His arm still drags at times, causing his release point and command to be inconsistent, but he is a good athlete with a loose arm, prompting scouts to project his command as at least average.”

6. Sammy Solis
“Solis has a good delivery, a physical frame and an unflappable demeanor on the mound.”

7. Michael Taylor
“He’s a plus runner with plus-plus range thanks to his outstanding reads and jumps, and his plus arm is accurate. He made huge strides with his baserunning, demonstrating good leads, reads and jumps.”

8. Jake Johansen
“Though his command and his secondary stuff remain works in progress, Johansen dominated the NY-P with a premium fastball that sat at 94-96 mph with heavy sink and topped out at 99.”

9. Nate Karns
“He has a second plus pitch in his wipeout hammer curveball, which ranges from 82-85 mph. He’s still learning to throw the curve for strikes, but he excels at getting hitters to chase it.”

10. Steven Souza
“Souza is a physical specimen with multiple loud tools. He has 65 raw power and is capable of hitting home runs from pole to pole.” 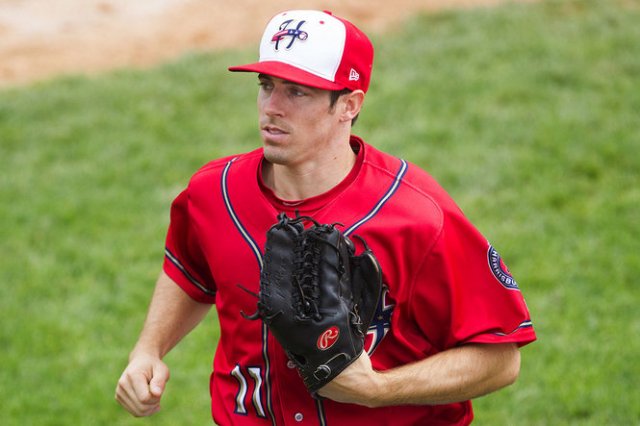 Then at 2:30 BA writer Aaron Fitt went in an online chat to discuss the list and those players that missed the cut. Here are some snippets on other noteworthy current and former Senators.

Billy Burns
“You’ve got to love Burns’ top-of-the-charts speed and his ability to make good use of it. He knows his game and does not try to do too much.”

Zach Walters
“He has plus arm strength as well, which should be an asset at shortstop, but he’s just an erratic defender, and his strikeout/walk rate is a significant concern for me.”

Taylor Jordan
“I like that power sinker/slider combination, and I like that he’s already proven he can get big league hitters out.”

Tanner Roark
“One scout I spoke with saw him at 92-95 with a plus slider at 82-85 and a slightly above-average curveball. That’s loud stuff, and he certainly would have been a real factor on this list had he qualified.”

Eury Perez
“It’s tough to succeed as a speed guy without an impact bat if you’re not drawing a lot of walks, and at this point it’s becoming unlikely that Perez is suddenly going to morph into an on-base machine. He still has value because of his plus-plus speed, his quality defense, his solid arm and his baserunning ability.”

Destin Hood
“He just has not progressed as the Nationals hoped. His swing lacks fluidity, he still struggles to recognize spin, and his power potential still does not translate to game action.”

Brian Goodwin
“I haven’t given up on the idea of him becoming a star, but he also might be just a solid regular who fits better in the 7-hole than the leadoff spot. There is a wide variance of opinion among evaluators when it comes to Goodwin.”