Without baseball on the horizon, I’m using this time to connect with former Senators. We will relive some of their fondest memories and find out what they’re up to now. This week we’re making yet another call to the bullpen for Colin Bates.

The Nationals selected Bates in the 2010 23rd round out of the University of North Carolina. The right-hander made 67 appearances including 16 starts over the 2014 and 2015 seasons with Harrisburg pitching to a 4.03 ERA. 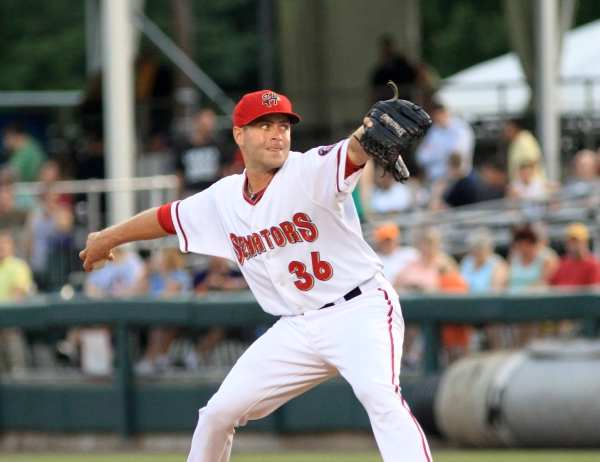 Colin Bates: Since the conclusion of my playing career, I have been working for a Registered Investment Advisor and Trust Company here in Chapel Hill, North Carolina – Franklin Street Partners. Within the firm, we have a Family Office group that helps to advise primarily Professional Athlete clients as they navigate their everyday lives. It has been great to stay involved working with athletes in this capacity, while helping guys transition from college in to professional athletics and beyond. I recently took on the Executive MBA program at UNC Chapel Hill’s Kenan Flagler Business School, and graduated in November of 2019. I’ve enjoyed finding ways to put lessons learned in the program in to practice right away within my role at work.

On the family front, my wife Cydney and I celebrated our 5th wedding anniversary this past October, and welcomed our first son, Jarrett, in to the world this February. We feel very blessed to have a happy, healthy boy to share our lives with! Our 9-month-old yellow lab, Isla, keeps us on our toes as well; it has been fun to see our family grow.

CB: My fondest memory of playing in Harrisburg would be having the good fortune of participating in the Eastern League All-Star Game in 2014. When Neil Holland was unable to make the trip, I was thrilled to get to fill in his place. I had never been able to play in a game like that throughout my minor league career. As challenging of a road as I had to make it to that point, it definitely gave me the confidence to feel like I belonged at that level and could succeed there.

When it comes to the folks in Harrisburg, I’ve got to give a shoutout to Chris and Sheryl Delozier, my host family for two years. They were overly gracious to have me in their home without asking for anything in return. Looking back on my whole minor league career, I am amazed at the families that open their homes for folks like us and understand how difficult it can be without people like them! We still exchange Christmas cards and the like, it has been crazy to see their kids grow up!

CB: Much like most of us would probably mention, in the beginning, it was just something that came more naturally to me than other sports. In general, I think it is fun to compete at things you are relatively good at!

I would say I continued to pursue it as I fell more and more in love with the game and everything it represents. I don’t think there is a purer form of competition (outside of maybe a street fight) than that between a pitcher and a hitter. I loved the adrenaline it would stir up, and do not feel it is possible to find anywhere else. I love what you can learn about a teammate, a team, a coach, or yourself over the seven months of a season; there is just nothing like it!

CB: Go ahead and start the glory days soundtrack on this one. My best memory playing baseball dates back my high school team being able to win our State Championship. We had an incredibly close group of players, families, and coaches that had been through a lot leading up to our senior season. Our two coaches both had their own personal battles with cancer throughout the season, alternating who could be at practice each week. They had been coaching for 30+ years at the time without ever winning a championship; for us to be able to deliver that for them was something I will cherish forever.

CB: I would definitely credit this to running through the pros and cons of what continuing to play meant for me and my family. While I felt as though I could continue to compete, and hate that I fell short of my goal of making the big leagues, the cons of being away from family and making next to no money, it was time to be done after that 2015 season. I think me at my best was good enough to make the big leagues, but realistically I wasn’t the best version of myself often enough!

I’ve enjoyed my time since then setting new goals and look forward to each new stage of life with our growing family!

Thanks to Colin for taking the time out of his schedule to answer our questions.

This entry was posted in Catching Up with... and tagged Colin Bates. Bookmark the permalink.