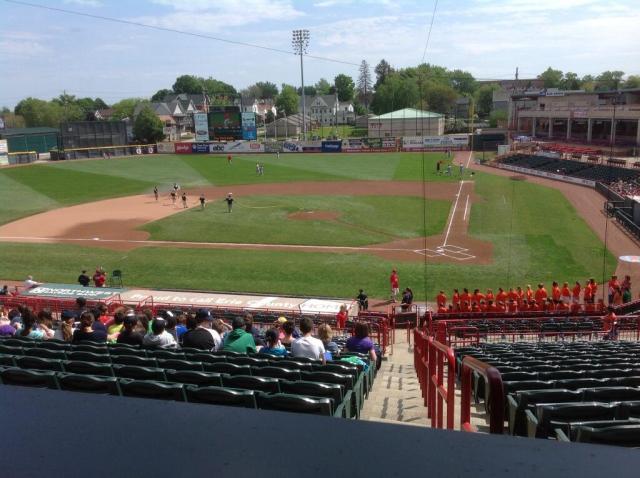 (PR) Marshall Kelner / Erie, PA – The Senators hit three home runs for the second consecutive game, but this time fell to Erie 7-6, as the SeaWolves walked off with a 7-6 victory on Wednesday afternoon. The loss snapped Harrisburg’s season-high five-game winning streak.

The Senators jumped on the board first with two solo shots in the third inning from Ricky Hague and Jerad Head. For each, it was their third homer of the road trip.

After Erie scored three in the bottom of the third to take the lead, the Sens bounced right back with three of their own in the fourth, all coming on a three-run blast off the bat of Sean Nicol. It was his first home run of the season and the first three-run homer for the Senators all season as well.

The home run theme continued, as Erie tied the game at five with solo shots from Wade Gaynor and Hernan Perez in the fourth and fifth innings.

The contest remained knotted up until the ninth, when Nicol delivered again, this time with a sacrifice-fly to put the Senators in front. Aaron Barrett, who was a perfect seven-for-seven in save situations, came one out away from closing the deal. However, with runners on first and second, James McCann came through with an RBI single to score Jamie Johnson. Eugenio Suarez came in with the winning run when Head’s throw in to second base from left field was off-line and got away.

On Thursday morning, the Senators conclude their four-game series in Erie against the SeaWolves. Game time is 11:05 a.m. and the game can be heard on 1460am The Ticket, on the Internet through the Senators website, and it’s available through iHeart Radio beginning with the pregame show at 10:50 a.m.