Without baseball on the horizon, I’m using this time to connect with former Senators (all of them can be found here).

We will relive some of their fondest memories and find out what they’re up to now. This week we’re gearing up behind the plate for Brian Jeroloman. 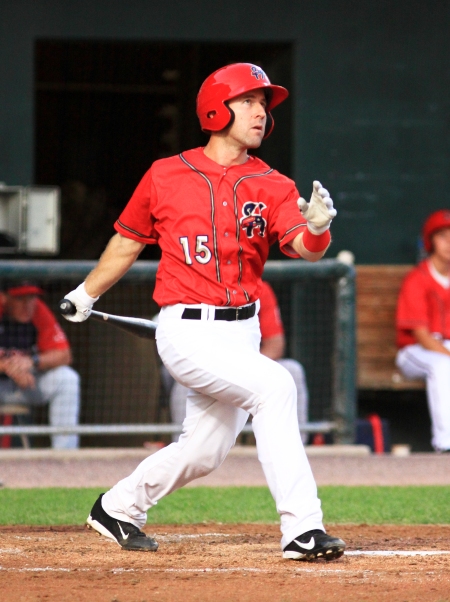 Brian Jeroloman: I work for the New York Yankees. I live in West Palm Beach, Florida, so I’m back where I grew up, which is really nice. I love it. I’m a scout in South Florida, and it’s a lot of fun.

BJ: I would probably have to say I really enjoyed Matt LeCroy. There are few coaches like him. It’s hard to find a coach that’s a good motivator and a good communicator. It isn’t easy, and that’s something that he was the ace of spades in. He made it really easy coming to the ballpark with all the different personalities that every team has. He knew how to communicate with each person.

2013 was a great memory. That was a challenging year for me as I got traded a couple of times that year. As a catcher, it’s not fun to be traded. I had been with Toronto for seven years; then, I went to Cleveland. That was Terry Francona’s first year. I was there in Spring Training. As a catcher, it takes like a month and a half to really get to know your pitchers and communicate with them. At the end of Spring Training, they traded me to the Pittsburgh Pirates.

I’m in Triple-A. We have a great team with guys like Gerrit Cole, Francisco Liriano, and Jose Contreras was on that team. Overall, it was a phenomenal team, and we were winning a lot in a great city. I was there about a month and a half, and then I got traded to the Nationals. So I go to Triple-A Syracuse with guys like Ross Ohlendorf, Chris Young, Tanner Roark. Mentally, it was a tough year because of the consistent changing of pitchers.

I’m in Syracuse for about a month, and then Wilson Ramos came back from an injury. (Washington Assistant GM) Doug Harris called me in and asked me if I’d be willing to go to Double-A. I wasn’t fond of that. Because I had been there in 2008, 2009, and 2010, and had been an All-Star those years. So it was just like ‘What else do I have to prove at that level?’ Doug was as first-class as they come, talked to me for a while. He really changed my mindset completely. It was the right move to make, and that’s where I got to see LeCroy.

The team was winning. We had Steven Souza, Brian Goodwin, Nathan Karns, Blake Treinen, and Robbie Ray. It was a great group of guys that really enjoyed playing the game, and we had a lot of fun.

When I look back, I really love 2013. It was a great staff with Paul Menhart and LeCroy. It was a great group of kids that were hungry to play the game. And we were winning, which made it so much easier.

BJ: Mine is a unique story. The easiest answer is my brother played it. I started playing baseball illegally when I was two years old. My brother was four or five, and I was playing on his T-ball team. It was against every rule, but I could catch so they put me at first base.

My brother was the person I always looked up to, but it wasn’t just that. Baseball is so intriguing because every day you step on the field, even when I was 32, I was still learning something every day. There could be a play that you have never seen before. It’s all these puzzle pieces, and you’re trying to put it together, but it’s a never-ending puzzle.

I remember my dad grew up with Walt Weiss (former AL Rookie of the Year, 14-year MLB veteran, and Colorado Rockies manager) and knew him growing up in Suffern, New York. So my dad took us to a game in Miami at then Joe Robbie Stadium, and I got to see Walt play a game in front of all those people. It was just one of those feelings that I’m going to play here one day.

It’s a unique road. I was a second baseman until I was 15 years old. I had a really great high school coach who transitioned me to a catcher. That’s when things really started clicking. Once you get confidence in the game, the game becomes fun, and that’s where your talent really starts to kick in.

BJ: I’ll give you three that stick out. Getting the opportunity to play on Team USA in 2005 was a special moment. I knew the significance of that. The players on that team were unbelievable. There was Max Scherzer, David Price, Sean Doolittle, Mark Melancon, and John Jay. Top to bottom, it was such a good team. It was an opportunity to represent your county, and that was a special moment. It lets you know you’re doing stuff right.

Another one was getting to play against my brother in college, the person I looked up to the most. It’s not very often your brother is coming up to bat, and you’re catching. We swept them all three games we played because I still talk smack with him about that.

Everyone can say getting the call to the big leagues. It was unfortunate for me the night before I got called up, I broke my wrist sliding into third base. That’s a great moment, but when you find out you’re hurt, you really can’t do much, so that’s not up there. I would say my third is playing in the National Championship series. We had to beat Florida State, our biggest rival, at our home to go to Omaha. That was a special feeling.

BJ: There was a lot. I’m not going to say I accomplished as much as I wanted to, but I did everything I guess I could have. I was in the major leagues – it was a great feeling. I got the opportunity to represent my country. I played for 11 seasons and 12 years.

When you’re a catcher, and you’re hitting 30, people would ask me about my body. I’d be like my body feels great, but then you think I’ve had surgeries to both my knees, on a hip, and of course, I had the collision. I’m like, what am I doing? When I have kids one day, I want to be able to walk with them.

I always told Doug (Harris) that if I got hurt again, I’d be done. That Spring Training, I hurt my oblique, so I missed three weeks. It just came to a point where it was time to move on. I don’t have any regrets. The one thing I can always say, and I don’t want to make this sound cheesy, is the one thing that was important to me was when I put my jersey on, whether it be in the minor leagues, majors, or college, I never took that for granted. That’s why I’ve stayed in the game of baseball. It’s the one thing in life that I truly, truly love.

Thanks to Brian for taking the time out of his schedule to answer our questions.

This entry was posted in Catching Up with... and tagged Brian Jeroloman. Bookmark the permalink.